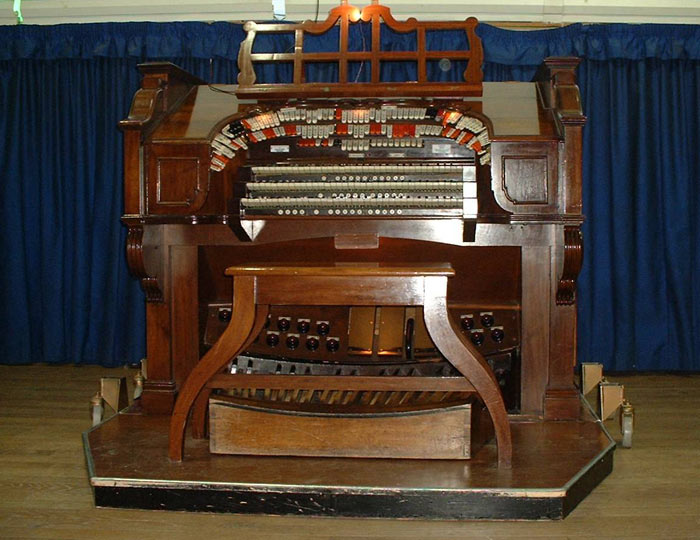 A History of the GOSPORT COMPTON ORGAN Thorngate Halls Gosport

The Compton Cinema Organ was originally installed in the Gaumont Palace, Wood Green, London and was opened by Frederic Bayco 26 March 1934. It then moved to the Twickenham College of Technology in 1966. In 1980 the organ was on the move again, this time to Gosport. The Compton was opened on Sunday 26 April 1981 by John Mann.

The whole instrument is totally enclosed within two separate purpose built chambers known as the Solo & Accompaniment chambers and the sound is projected from the back of the stage into the Ballroom through shutters.The blowing equipment is contained in a separate soundproof room consisting of a series of fans driven by a seven h.p. three-phase motor which also drives a fifteen volt d.c. generator supplying current for the organ action only. The fans develop a powerful wind pressure and deliver to the six compressors at the rate of ten thousand cubic feet per minute.

The three manuals (or keyboards) of sixty-one notes, each CC to C are known from the lowest one upwards as: Accompaniment, Great and Solo.The pedal board contains thirty-two notes CCC to G. There are a hundred and fifty-two stop keys in the usual horseshoe layout and grouped according to the department they control. For facility in operating the stop keys there are eleven thumb pistons under each manual as well as thumb and toe pistons for the pedals. There are three balanced swell pedals, two of which control the swell shutters of the two chambers, the third being a general crescendo pedal which adds the stops of the great and pedal organs one by one without moving the stop keys.

Two of the manuals and the pedals are fitted with double touch, together with double touch on the stop keys. Combinations of stops can be pre-set by the organist to operate from the thumb pistons.

Connection between the console and the organ itself via the relays is by means of a flexible multicable. The complex relay mechanism is situated in the solo chamber and it is into this that the connections of the multicable from the console are made.  Therefore all ‘messages’ received from the console operate the electro pneumatic mechanism in the relay which ‘sorts’ the circuits and passes the current to the electro magnets operating the pipe. Every stop key, piston, pedal and note of the keyboards is virtually an electric switch and when operated passes a fifteen volt current via the multicable to the relay units.

To summarise: there are nine hundred pipes, two thousand magnets, one hundred and fifty-two stop keys, fifty-three thumb and toe pistons and eight hundred insulated wires in the multicable between console and organ.

Are you an organist or do you just enjoy listening to others play? Either way you would be welcome to join members at their meetings on the second Wednesday of each month between 1pm and 5pm.At present we have vacancies for new members but your first visit will be as our guest. Thorngate Halls, Bury Rd, Gosport, Hampshire.