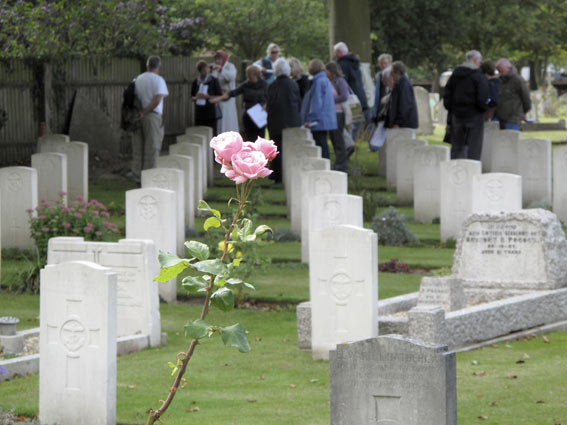 The Royal Hospital Haslar opened in 1753 and from that date all those who died either at Haslar or aboard ships in Portsmouth Harbour, Spithead or the Solent were interred in the grounds of the hospital.

The old cemetery at Haslar is situated to the south-west of the hospital.  Enormous numbers were buried there.  No records were preserved but, in 1780 it is known that more than 900 deaths occurred at the hospital, and in a period of three years towards the end of the 18th century 3,600 bodies were interred there.

The grounds of the cemetery were fairly open, but around 1827 a part was enclosed and this was in use until 1859 when the Clayhall Road site was opened.

Because of the frequency of funeral processions and patients in the hospital becoming agitated, a ruling came into force that accompanying bands were not allowed to start playing until the procession turned into Clayhall Road.

The Royal Naval Cemetery, Clayhall Road encompasses an area of approximately 17 acres and contains 763 WW1 graves, 2 of which are unidentifed.  Most are scattered throughout the cemetery, but the 42 Officers and men of HM Submarine ‘L55’ whose bodies were brought back from the Baltic in 1928 lie together in a collective grave and their names appear on a Screen Wall Memorial.

The WW2 graves number 611, 36 of them unidentified.  A number of the graves are scattered throughout the cemetery, but the majority lie together in one or other of the five groups, the largest of which contains more than 360 burials, the smallest 25.  There are also 19 Foreign National burials connected to war and non-war death. 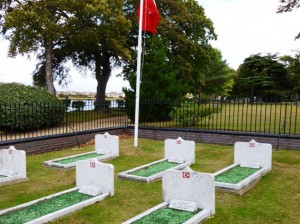 en and yes even children are buried here.  It is a working space and funerals still take place.

Many magnificent monuments commemorate the men who served on ships and submarines and each tells a story unique to the vessel and men.

There are also many women buried within the cemetery who ‘did their bit’ to help our country.

One particular plot, which isn’t very big might play a very large part in our story of why Gosport is known by many as ‘Turk Town’.  This is our Turkish Cemetery where the remains of 26 sailors/marines lie.  In late 1859/1850 two Turkish ships of the Turkish Navy were visiting the area and part of the time were anchored off Hardway.  Several men were admitted into Haslar Hospital for treatment and from that number 26 died.  They were originally laid to rest in the grounds of the hospital, but space was required to build the zymotic diseases (isolation) block.  The graves were originally surrrounded by railings and called the Turkish or Mohammedans burial ground.  In 1900 the bones were removed and re-interred here.

Members of the Turkish Embassy, Forces Representatives and families visit each spring to honour these men by praying and laying wreaths and flowers.  In 2011 the President of Turkey visited the cemetery to pay his respects before travelling across the harbour to Portsmouth.

Like all cemeteries nowadays we are a haven for a wide selection of wildlife, birds, mammals and rodents.

We also have a magnificent collection of trees, fungi (during the autumn) and orchids (spring and autumn).

The cemetery is open every day, times are displayed on the signs.  The Cemetery Office telephone number is 02392 765 385 (during normal working hours only).