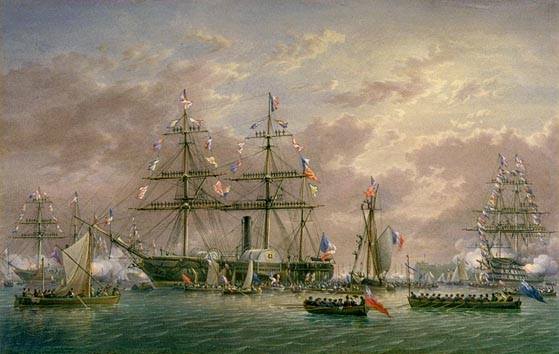 Today in Gosport’s Past:-  on 8 October 1844, Prince Albert travelled to Gosport by train to greet Louis Philippe of France on his arrival at Royal Clarence Victualling Yard. Louis Philippe remained as a guest in Gosport until 14th October, when Queen Victoria made her first train journey to Gosport in order for herself and Prince Albert to accompany him on his return trip to France aboard the royal yacht, although adverse weather conditions on the day caused postponement, then cancellation of the plans, with Louis Philippe opting for the shorter sea crossing from Dover instead.
The following year, Victoria & Albert purchased Osborne House, on the Isle of Wight, and as a result, Albert negotiated for the railway to be extended through the town ramparts to a private station in Clarence Yard, which was duly opened on 13th September 1845. The painting below is entitled ‘Louis Philippe at Gosport, October 1844’ and is attributed to both William Joy (1803-1879) and John Cantiloe Joy (1806-1859). The painting itself is in situ in the British Embassy in Paris.