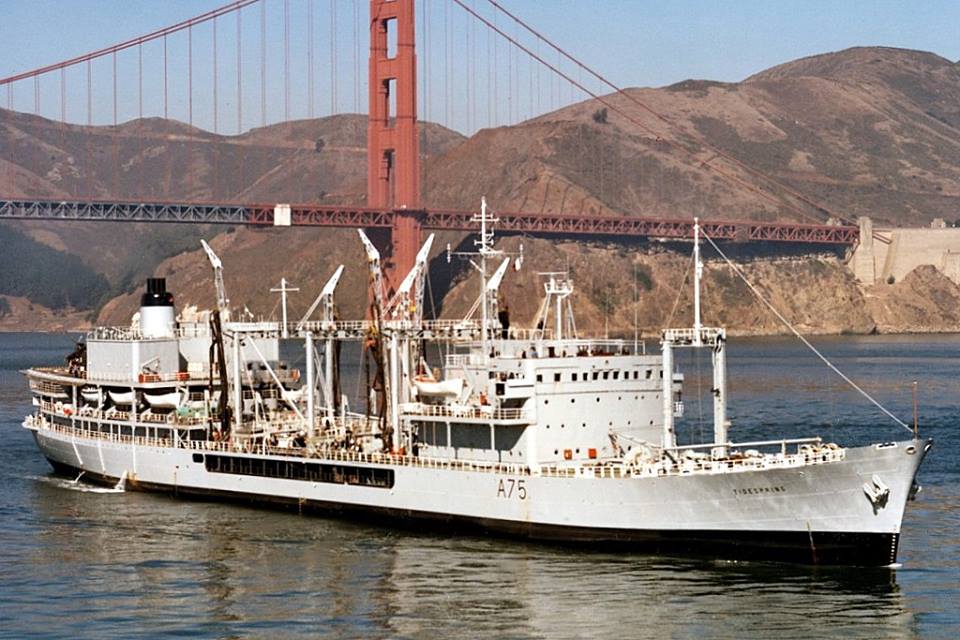 Today in Gosport’s Past:- on 4 October, the Royal Fleet Auxiliary oil replenishment ship “Tidespring” and her crew were presented with the Falkland Islands 1982 Battle Honour at Clarence Yard, Gosport by Captain C G Butterworth, in recognition of the vital role the ship played in the Falklands conflict, particularly in the taking of South Georgia.

“Tidespring” was one of six ‘Tide’ class ships built between 1953 and 1963. Of these, one was sold to the Royal Australian Navy in 1962, becoming HMAS “Supply” and paid off in 1985, three were scrapped in the late 1970s, and by the time the Falklands conflict arose, “Tidespring” was due to be added to the disposal list, along with the other survivor, RFA “Tidepool”, and both were hastily recommissioned and sent to the Falklands.

The Falklands conflict had effectively added ten years to the life of “Tidespring”, which was eventually decommissioned on 13 December 1991, and she was towed out of Portsmouth Harbour on 20 March 1992 to Alang, India, where she arrived on 2 July 1992, and was broken up soon afterwards. Credits to original photographers.