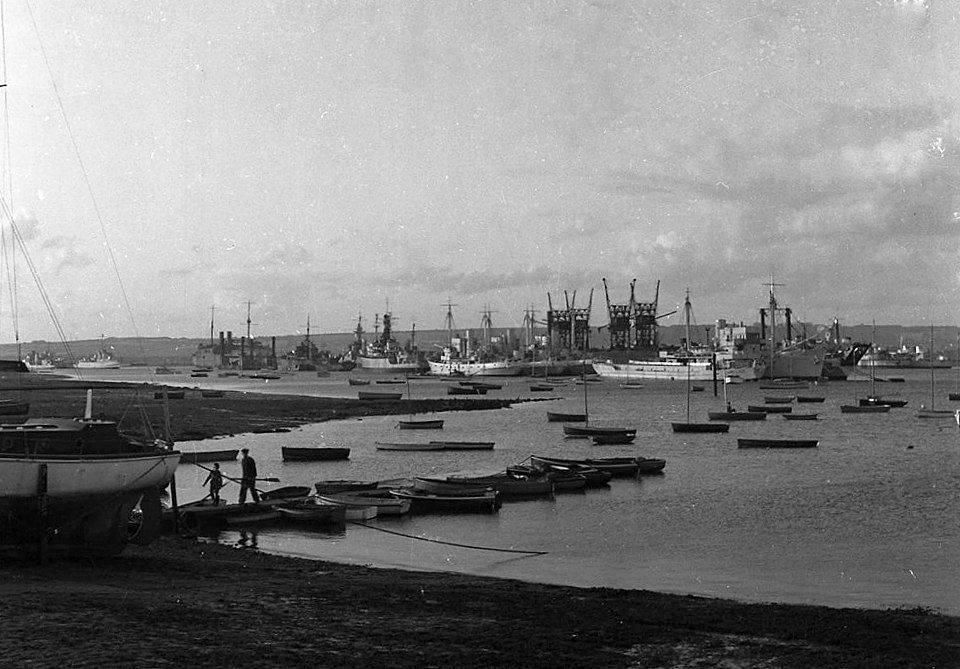 Today in Gosport’s Past:- on 16 January 1964, “C.1”, the largest floating coaler in the world, was unceremoniously towed from Hardway to a Dutch scrapyard.

The coal hulk, ordered as an Admiralty contact in 1901, never recieved a name as such, but was always known officially as “C.1”; it was launched on 27 February 1902 at the Tyneside shipyard of Swan Hunter & Whigham Richardson. Work continued on board after the launch, and the cranes were assembled elsewhere in the shipyard, the vessel being completed in June 1904. The four large cranes were dismantled and stowed in the hull for the journey to Portsmouth.

“C.1” was towed from Tyneside on 23 June 1904, arriving in Portsmouth three days later, on 26 June. Once in Portsmouth, the cranes, deck trackwork (the cranes ran on tracks on board), and associated odds & ends were assembed, and “C.1” was ready for action by October 1904, at which time she was positioned near Portsmouth dockyard.

I’d better explain that C.1’s only role in life was to dispense coal to Royal Navy ships, and others under the control of the Admiralty (tugs, port auxiliary vessels, RFAs, and the like). She was equipped with four massive rail-mounted cranes, with a jib either side, so there were effectively eight cranes, each with large buckets for dropping coal into ships. When not in use, the cranes towered 100ft above the water. The hulk was ‘longer than a football pitch’ (424ft), and could stow 11,000 tons of coal in hoppers and 1,080 tons in sacks. Coal could be channelled into sacks (if required) through any one of 80 coal chutes.

C1 remained near the dockyard until sometime in the 1920s, when she was anchored some 300 yards off Hardway, where, apart from a visit to the dockyard for her last refit during the last three months of 1946, she remained until 1964. In the late 1950s, the demand for coal dwindled, owing to the ever-increasing use of diesel as a source of fuel, and during this time, much of C.1’s superstructure, and two of the four cranes were dismantled and removed.

This was a very unique vessel, and as I said earlier, THE largest coal hulk in the world, but with the virtual disappearance of coal as a marine fuel, she had outlived her usefulness by the early 1960s, and was towed off to Holland for scrap on 16 January 1964. The departure of this ugly old lady went completely unnoticed in any press reports, sadly. Such an eyesore was rarely (if ever) the subject of photographs, so these are mostly photographs of scenes, or other ships in which C.1 happens to appear in the background – a big black unsightly thing.

Credits to original photographers, and the details of C.1 are thanks to the writings of David Maber, a venerable local historian.