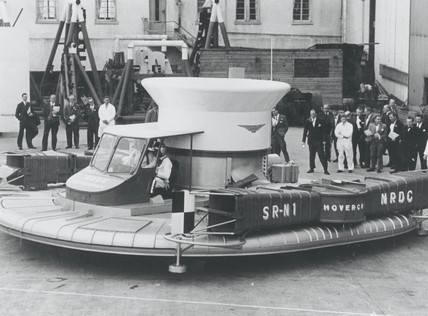 Today in Gosport’s Past:- on 11th June 1959, Christopher Cockerill’s prototype hovercraft SR-N1 made its maiden flight in the Solent from HMS Daedalus. Following the success of the flight, hovercraft development continued, and on 24th July 1965, the Hovertravel service between Stokes Bay (near to No.2 Battery) and Ryde, and Southsea to Ryde, began, using the Westland SR-N6 hovercraft. The two routes were the very first REGULAR public hovercraft services anywhere in the world (experimental hovercraft services had been tried in the Bristol Channel, but the craft was wrecked in a storm). Sadly, the Stokes Bay service didn’t fare as well as the Southsea operation, and services ended on 28th September 1968, possibly to the relief of local residents in Gomer & Alverstoke (it WAS very noisy!). Of course, the Southsea-Ryde route blossomed, and is still popular today, and is the last remaining public hovercraft service in Europe. Credits to original photographers.