FILM is held at the Wessex Film and Sound Archive: https://www.hants.gov.uk/librariesand… and you can see full details of this item on their online catalogue. If you’d like to see it in full or order a copy simply contact them on enquiries.archives@hants.gov.uk 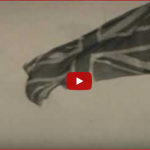 This film is a record of various events in the year 1936. Titles: Our cameraman reports from the Queen Mary prior to her maiden voyage to New York. Large, white hulled liner at Southampton. (Probably one of the Canadian Pacific Empress class). General view showing a lot of liners berthed at Southampton. Queen Mary with paddle boat in the foreground for comparison of size. Closer views of Queen Mary from quayside showing bridge wings and promenade deck. Titles: Let’s compare it with the Berengaria. Camera pans to compare ships, both 3 funnellers. At Gosport. The launching of T O M Sopwith’s new racing yacht Endeavour at Camper & Nicholson boatyard. Titles: back on the slip way to be fitted out. International model yacht racing on Gosport’s yachting lake, Walpole Park. British boat wins. Rows of cars under national flags (including the Nazi flag of Germany), alongside the lake. Title: The British boat wins. Titles: Fareham. The carnival on August Bank Holiday. Street procession with many floats, all horse drawn. Titles: The Carnival Queen, Miss Nellie Hoad. Floats including the Queen Mary, a jungle scene with tiger etc At Gosport. The carnival at Walpole Park on Wednesday, August 5th, 1936. Fire engine. Lifeboat. Marchers. Motorised and horse drawn floats. Gunton Bros, fruiterers, 46 High Street. Ritz cinema poster on one float. Bishops for Moccasin shoes. Kodak model girl in bathing suit. Red Cross. Miss Queenie Pumfrey who is Miss Gosport 1936. Southsea Motor Races. Push start for cars on what looks like the Eastern Road. The Carnival fever reaches Portsmouth. Naval band. Caravan disguised as an elephant. 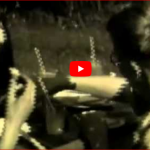 “The Changing Face of Gosport”

These 3 films show life in Gosport in the 1950s including the Queen Mother visiting, Bridgemary Senior Sunday School Outing in 1956, and Easter Monday at Old Winchester Hill and East Meon in 1959. 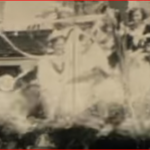 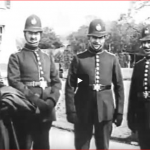 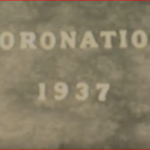 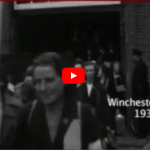 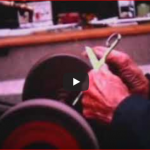 Shots of the truck of a working cutler. The painted sign on his cart reads: D A Roper, Working cutler, China and Glass Rivetter. Gosport. Shots of him pushing his cart around a village, and then setting about to work sharpening cutlery. Close up on his face as he works. Shots of his cart. Mr Roper himself wears a smart suit and bowler hat while at work. 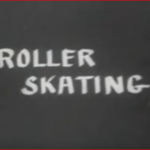 Southsea Roller Rink has all sorts of people taking advantage of this fast paced past time in the post war period. Some great shots of the miniature railway too. 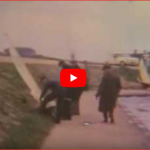 1960s. Model  boats race on a man made lake/reservoir in Gosport, Walpole Park, South Street.
Mother and son in an outdoor swimming pool – possibly Hilsea lido.
Portsmouth seen from Gosport. The Semaphore tower, and other landmarks seen. Naval ships at dock, indistinguishable in the footage.
Portsmouth power station (1894-1977) Footage taken from the Park at Mumby Road, just opposite the dockyard. The park has changed very little, but does now have a different fountain than the once seen in the footage. Manicured lawns and well kept flower beds. Hovercraft coming in.
Footage of the Solent from Southsea castle, with a view of the lighthouse. Shots of children playing in a shallow pool at ‘Children’s Corner’ Southsea, miniature railway is seen in the background.