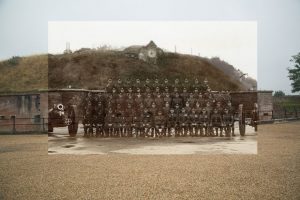 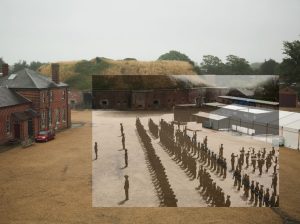 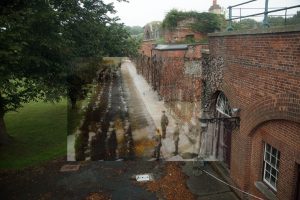 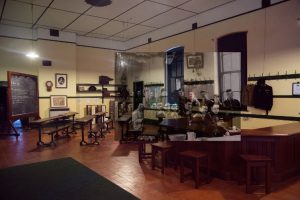 Some fantastic photos of Fort Brockhurst taken by Tory  Smith, superimposing the past onto the present. This is what she says..

“My series of images reflected on Fort Brockhurst, where I used their archival images and I recaptured the spaces of where they would have been shot. The series was a submission for a University project in which I was to look at ‘space’ and interpret it in my outlook. My reason for using Fort Brockhurst is because I have spent many years living right by the fort, going to various events, and always passing by it on occasions, so has always been a part of my past. The other interest is that it was still an accessible place, and over time this has become less to the public.

The archival images gave an insight to how the spaces were filled and used by the military, for its intended purposes at that time, but yet the superimposition of the past images to the present state leaves a trace of where they were at that time.  I wanted these images to create a sense of reflection to the viewer, and show empathy to those who may never have come home from the war.

As well the differences between the past and future are noticeable. I never knew there was a clock in the main fort, and there are a few chimney pipes missing in the present image, which is show in the image of the group battalion image.

With the presentation of how I set the images up together took a bit of manipulation so that they aligned with the background or surroundings, I did not want them to just look placed on, but to be respectfully matched. The colouring too was a large factor. The black and white tone needed to look like the past was just as important as the present colour image.

I felt that this series showed a nice timeline of how the fort was constantly in use, especially with the traditional parade in 1942, while a war was being fought this was still taking place.”

28 Gosport Past & Present: seen through the lens

HIDDEN GOSPORT: looking from the inside