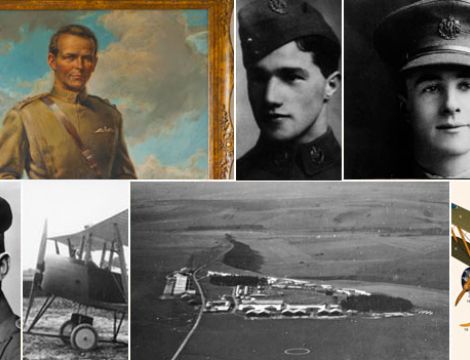 During the early stages of WW1, the casualty rates at flight training centres worldwide were remarkably high with more pilots lost during training than actually in combat!

Bloody encounters in the sky gave Major R. R. Smith-Barry acute awareness of the perils of aerial warfare – and the need to be adequately prepared. Speaking of young pilots, he said to Sir Hugh Trenchard: “They’ve only had seven hours flying, Sir – and it’s bloody murder.”

Smith-Barry secured the agreement of Trenchard, the British pioneer responsible for British military aviation, to return to Britain and re-organise training at a new school at Gosport in August 1917. Smith-Barry’s methods were so successful as to gain worldwide renown and his approach was rapidly adopted among most combatant nations with a major air force.

He lived at Alver House (now the Alverbank Hotel) with his wife and used the premises as an officers’ mess.

This illustrated talk (held in the building where he lived over 100 years ago) will allow you to discover something about the man and his methods, which gained him the accolade of being referred to as “The great Smith Barry – the man who taught the world to fly!”

Please note that this is an Event from 2019

No Booking Needed – Just turn up and enjoy

Some free parking by hotel, especially suitable for disabled or elderly visitors. Also lots of ‘pay to park’ spaces on the main bay road. Close to X5 and 9/9a bus routes. The Alverbank offers a wide range of refreshment/food throughout this time. Bar snacks, full meals, afternoon teas, and delicious ice creams are all available to purchase.

Please arrive 10 mins before the start time to choose your seats. Sorry, but no admission once talk has started.

Turn off Stokes Bay Road opposite the sea wall.

Behind the Doors of Gosport Lifeboat Station (Event from 2019)