The parish of Rowner, containing 1,245 acres, of which two are covered by water, is situated in the exteme south of the county, the most southern point of the parish being about half a mile from the Solent. In this connexion it is interesting to note that Henry I was detained in ‘the town that is called Rowner’ in 1115 while waiting for a fair wind to carry him across to France. There is no actual village, only a number of old cottages scattered over a long narrow strip of land, the southern and eastern portions of which have been bought by the War Office for the land defences of Portsmouth, and the forts of Rowner, Brockhurst, and Grange, now obsolete and turned into barracks, lie to the east and south of the parish. Most of the cottages are very old and still bear the names of former occupants, although in many cases the families have been extinct for generations. The soil is loam on clay. In the south-east of the parish there are several disused gravel pits and also the site of an old windmill, probably the one belonging to the Grange Farm of Chark, at which the monks of Quarr were permitted to grind their corn in the twelfth or thirteenth centuries. The Grange Farm in the south of the parish is an old house of some interest. There are 506 acres of arable land, 653 of grass, and only three of wood. The sole industry is agriculture, the crops being chiefly grain. There is a recreation ground in the centre of the Government land, but no parish land or commons. An offshoot of the main road from London to Gosport divides the parish into two nearly equal parts. The River Alver enters Rowner to the east of Chark Common in the neighbouring parish of Crofton, and after forming for a short time its south-western boundary passes out of the parish in a south-easterly direction. The land skirting the river is low and subject to floods. The church is in the centre of the parish, and near it on the south-west are the very scanty ruins of a building supposed to have been the old manor house of the Brune family. The nearest station is Brockhurst, where the London and South Western line joins the Lee-on-the-Solent Railway. Some field-names are:—Hangmans Coppice, Great Whores, and Conygar.

At the time of Domesday the manor of ROWNER was held by William Mauduit. The family of Mauduit seems to have been of considerable importance at this time as the possessor of large estates in Hampshire, and its members were among the chamberlains of Henry I and II, William Mauduit, who died in 1171, being made Chamberlain of the Exchequer by grant of the king. In what way the manor passed from the Mauduit family does not appear, but in 1240–1 Elias de la Falaise held 3½ virgates and 63 acres of land in Rowner which he had exchanged with the prior of St. Swithun’s for 30 acres of land in the same parish, and which may probably be identified as part of the knight’s fee which William de la Falaise was holding as early as 1187. Seven years later Elias made a grant of 5½ virgates of land from the manor of Rowner to the abbot of Quarr, which grant was confirmed by Henry III in 1266. At his death in 1254 Elias was holding the residue of the manor of the king in chief by serjeanty, providing one armed man for forty days every year in time of war, for the defence of Winchester Castle. In the same year William de la Falaise, his brother, died seised of land in Rowner which he held by the same service, though by a fine made by his brother Elias he rendered 40s. yearly to the exchequer for alienation of the serjeanty, his brother’s widow, Lady Ida, holding dower in the estate. Before 1277 the property had escheated to the crown by the felony of William de la Falaise, grandson of William, and was granted in that year to Sir William le Brune, chamberlain to the king, to hold jointly with his wife Isolde, a lady of the household of Queen Eleanor, by the yearly payment of 40s. to the king’s exchequer in lieu of service, and seven years later William le Brune was granted free warren in his demesne lands. William died in 1301, and the estate was then held by Isolde until her death in 1307, when it passed to Maurice her son and heir. William son of Maurice succeeded to the property in 1355, and in 1358 obtained a licence to convey the manor to his daughter Joan and her husband, Thomas de Overton, in tail. William died between 1360 and 1370, and in 1371 Joan released all her right in the manor to her mother and her husband, Sir Robert de Marny, and to her brothers Ingram and Richard. Sir Robert de Marny and his wife transferred the manor to Ingram Brune between 1390 and 1392, and he died seised of the same in 1400, when the property passed, under a settlement made in 1392, to his wife Elizabeth, in tail male with remainder to William de Marny, son and heir of Robert de Marny. Elizabeth held the manor in dower during the minority of her son till her death in 1403. Her son Maurice came of age in 1407, and from him the estate passed to his son Henry, who held it till his death in 1461, when it reverted to a Maurice Brune, probably his brother, who, dying in 1468, was succeeded by his son Thomas. The manor passed on the death of Thomas in 1497 to his son William Brune, who was succeeded in 1512 by his nephew, Sir John Brune, who died in 1559 leaving a son Henry. The latter bequeathed a ‘manor or farm called the Grange’ in the parishes of Rowner and Stoke, to trustees, to provide portions for five unmarried daughters, and on his death in 1594 the manor and advowson of Rowner passed to his son John, who died in 1639, his heir being his nephew John, son of his brother Charles. On the death of John, who died without heirs male in 1645, his brother Charles succeeded to the estate. He died in 1703, and by the death of his grandson Charles Brune in 1769 the family became extinct in the male line. By his will his estates, including the manor and advowson of Rowner, eventually devolved on his grand-nephew the Rev. Charles PrideauxBrune of Padstow, Cornwall, who died in 1833, and whose grandson Mr. Charles Glynn Prideaux-Brune is the present owner. 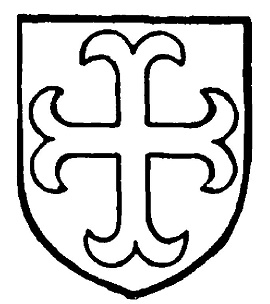 Brune. Azure a cross moline or.

The church of ST. MARY THE VIRGIN, ROWNER, is a small building, consisting originally of a chancel 14 ft. 2 in. by 11 ft. 5 in., and nave 25 ft. by 15 ft., being apparently work of the first half of the twelfth century, to which in the thirteenth century were added a wide north aisle and north chapel, which have become the nave and chancel, the older chancel being used as organ chamber and vestry. The church was extensively repaired in 1874, and shows little old work outside, none of the windows having preserved their old stonework.

At the south-east of the old chancel a modern doorway in twelfth-century style has been inserted, with a ring of reused twelfth-century sunk star ornament over the outer arch. The old chancel arch is pointed, of two chamfered orders, with voussoirs alternately of Binstead stone and clunch, the same arrangement occurring in the responds, which have keeled shafts to the inner order and round shafts in the outer, with moulded capitals and bases. The angles of the north arcade of two bays are like the chancel arch, but of Bembridge stone. The south doorway of the nave is modern.

In the north wall of the present chancel is a thirteenth-century piscina, and opposite to it on the south a single recessed sedile, to the west of which is a wide round-headed thirteenth-century arch, springing from moulded corbels, and opening to the old chancel. The font at the west end of the nave has an octagonal bowl and shaft. The woodwork is all new, but a panel of the royal arms, dated 1705, is hung on the east face of the old chancel arch.

On the north of the chancel is a fine tomb dated 1559, with no inscription recording the name of the person whom it commemorates, but the heraldry shows that he was a member of the Brune family, and the date makes it evident that he was Sir John Brune. The tomb is in the form of a panelled base, on which is a semicircular arch, over which are three pedestals supporting putti, who hold shields with the Brune arms. Beneath the arch are the arms of Brune with helm and mantling, and on the base four shields with the arms of Brune, Brune impaling Tichborne, Brune impaling Knowles, and Brune impaling Bamfilde, the names being written above the shields. Above the tomb are a helm and breastplate, placed here within recent years. All the details are exceedingly good and well executed, in the delicate early Renaissance style, which ten years later had lost much of its purity.

Externally the church shows little signs of age; the roofs are red-tiled, with a shingled bell-turret at the west containing one bell of 1709. In the churchyard are some specimens of eighteenth-century tombstones, with beautiful lettering, some being carefully repainted and set up against the church wall, and church and churchyard are models of neatness.

Copies of several wall paintings found during the repairs of 1874 are preserved at the rectory.

The first book of the registers is on parchment, and goes from 1590 to 1683, with one baptism of 1583, and at the end are paper leaves with entries for 1673–81. The second book has births and deaths 1669–1775, and marriages 1669–1754. The number of marriages for so small a parish is abnormal, and is explained by the fact that Rowner was a favourite place for marriages among the naval men from Gosport and Portsmouth. The third book contains marriages 1754–1810, and the fourth baptisms and burials 1775–1812.

The history of the advowson of Rowner is identical with that of the manor. From the time of the grant of Edward I the family of Brune with few exceptions have exercised the right of presentation. Very few members of the family have actually held the living. In 1292 Philip le Brune was presented to the living by Sir William le Brune, and he was succeeded in 1306 by Nicholas le Brune. The family was not again represented until 1884, when the present rector, the Rev. Edward Stapland Prideaux-Brune, was instituted.

There are apparently no endowed charities in this parish.