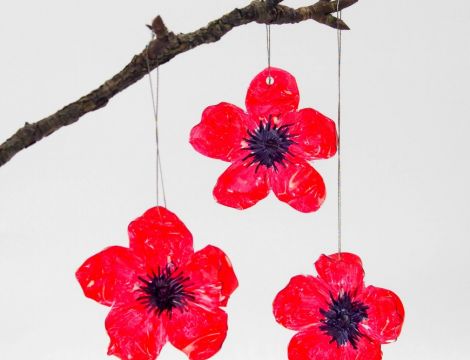 Join with local crafters in this community project making poppies which will form displays of remembrance and hope at various locations within Gosport for this Armistice Day, 100 years after the end of WW1.

In the spring of 1915, shortly after losing a friend in Ypres, a Canadian doctor, Lieutenant Colonel John McCrae was inspired by the sight of poppies growing in battle-scarred fields to write a now famous poem called ‘In Flanders Fields’. After the First World War, the poppy was adopted as a symbol of Remembrance.

At Fort Brockhurst, visitors of all ages are invited to drop into the workshops and join in with crafting a poppy. It might be made of wire or wool, felt or fabric, or even plastic bottles!

Whether you make a poppy to commemorate a particular member/s of your family, or just as a nice craft activity, these poppies will be kept for Remembrance Sunday, 11 November 2018, the centenary of the end of WW1, when the community of Gosport join the nation in coming together to give thanks to those who paid the ultimate sacrifice and those who returned home to help shape the world we live in today.
Please note: these poppies are not for sale and materials to make them are supplied.

The Royal British Legion will be present to raise awareness of their work and the RBL Poppy Appeal which benefits those currently serving in our Armed Forces, veterans, and their families and dependants.

Please note that this is an Event from 2018

There is 1 step up into craft rooms, so accessible to manual wheelchairs with assistance but not powered chairs or mobility scooters.

For travel information about how to get to and around Gosport, click here.

The Poppy Craft Rooms are within the Keep, turn first right as you enter the second arched tunnel.

The Evolution of Artillery (Event from 2016)