Periscope Film  These films are part of the Periscope Film LLC archive, one of the largest historic military, transportation, and aviation stock footage collections in the USA. Entirely film backed, this material is available for licensing in 24p HD and 2k. For more information visit http://www.PeriscopeFilm.com 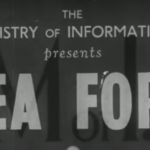 This rare WWII British film shows the operation of a Sea Fort, a fortified tower equipped with anti-aircraft guns and heavy artillery. The fort in question appears to be Horse Sand Fort, one of the larger Royal Commission sea forts in the Solent off Portsmouth, Hampshire, England. It is 73 metres (240 ft) across, built between 1865 and 1880, with two floors and a basement and armour-plated all round. The original armament was to have been 45 10-inch and 44 12.5-inch rifled muzzle-loading (RML) guns on the gun floors and 10 12″ RMLs on the roof in five turrets. In fact, the turrets were never built and the limited space meant the 12.5-inch guns had to be operated with less than full charges of powder. In 1882, 12-inch rifled breech-loading guns were placed in alternate bays. Horse Sand Fort was built on a ring of masonry consisting of large concrete blocks with an outer skin of granite blocks, the interior being filled with clay and shingle and covered with a thick layer of concrete. The lower foundation walls of the fort are 18 metres (59 ft) thick. The fort is split into three levels with the top measuring 62.4 metres (204 ft 9 in) in diameter. The floors would have originally provided storage of armoury and guns and the things needed to sustain the men that were stationed on site. The top of the fort consisted of a lighthouse and various chimneys and ventilators. The fort has its own Artesian well (aquifer) which provided fresh water. The seaward side of the fort was covered in a heavy iron-armoured plating to protect it from seaborne attack. Access to the fort was by a wooden-decked landing stage supported on cast-iron piles. In the late 19th century the Solent forts were painted in a black/white checkered paint scheme as an early form of dazzle camouflage. In its unrestored state remains of this pattern is still visible on parts of Horse Sand Fort. During the Second World War extensive submarine defences were built in the form of large concrete blocks running about 1.8 metres (5.9 ft) below sea level from the fort to the shore at Southsea. With only a single narrow gap to allow small craft to pass through, this barrier (and a much shorter one running south from No Man’s Land Fort towards Ryde Sands) remains as the cost of demolition is deemed too high. In March 2012, the fort was purchased by AmaZing Venues who operate the venue under the Solent Forts brand (owners of No Man’s Land Fort and Spitbank Fort) and is to be converted into a museum. 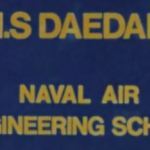 This 1973 short film promotes the H.M.S. Daedalus, the Naval Air Engineering School. The film opens with a shot of helicopters taking off from an aircraft carrier (00:16), then cuts to a scene of a student doing a flight simulation with a Wessex V mockup (00:36). The school’s female students, known as wren air mechanics (01:30), also study naval engineering. Students learn about and work on helicopters and fixed-wing aircraft, such as the Sea Vixen fighter plane (02:42). The men and women at H.M.S. Daedalus learn to load aircraft with bombs (04:50) and mount machine guns (05:38), as well as reading instruments in mock cockpits, such as one in a Westland Sea King helicopter mockup (06:31). Students enjoy having the opportunity to build their own small aircraft too, such as a Kittiwake (07:41). Royal Naval Air Station Lee-on-Solent (HMS Daedalus) was one of the primary shore airfields of the Fleet Air Arm. First established as a seaplane base in 1917 during the First World War, it later became the main training establishment and administrative centre of the Fleet Air Arm. Situated near Lee-on-the-Solent in Hampshire, approximately four miles west of Portsmouth on the coast of the Solent at grid reference SU560019, the establishment has now been closed down. The airfield hosts the Solent Enterprise Zone. The Mitchell Kittiwake is a British single-engine sporting aircraft designed for amateur building. Plans were available for both single-seat and two-seat versions, but only four were constructed. In addition to the prototype, two Kittiwake Is were built, one by Royal Navy apprentices in 1971 for glider towing. For this role a larger diameter (6 ft 4 in, 1.93 m) propeller is fitted, increasing the rate of climb by 24%. A tow release hook is fitted under the tail. Only one Kittiwake II, the prototype, was built. One Kittiwake was active until at least at 2005 and the other is still active. They remain on the UK Civil Register. These are the prototype, G-ATXN and the ex-Naval G-BBRN. The latter is painted, as in its Naval days, as XW784.

25 Going to church in Gosport: The Religious Census of 1851 – Video presentation

HIDDEN GOSPORT: looking from the inside