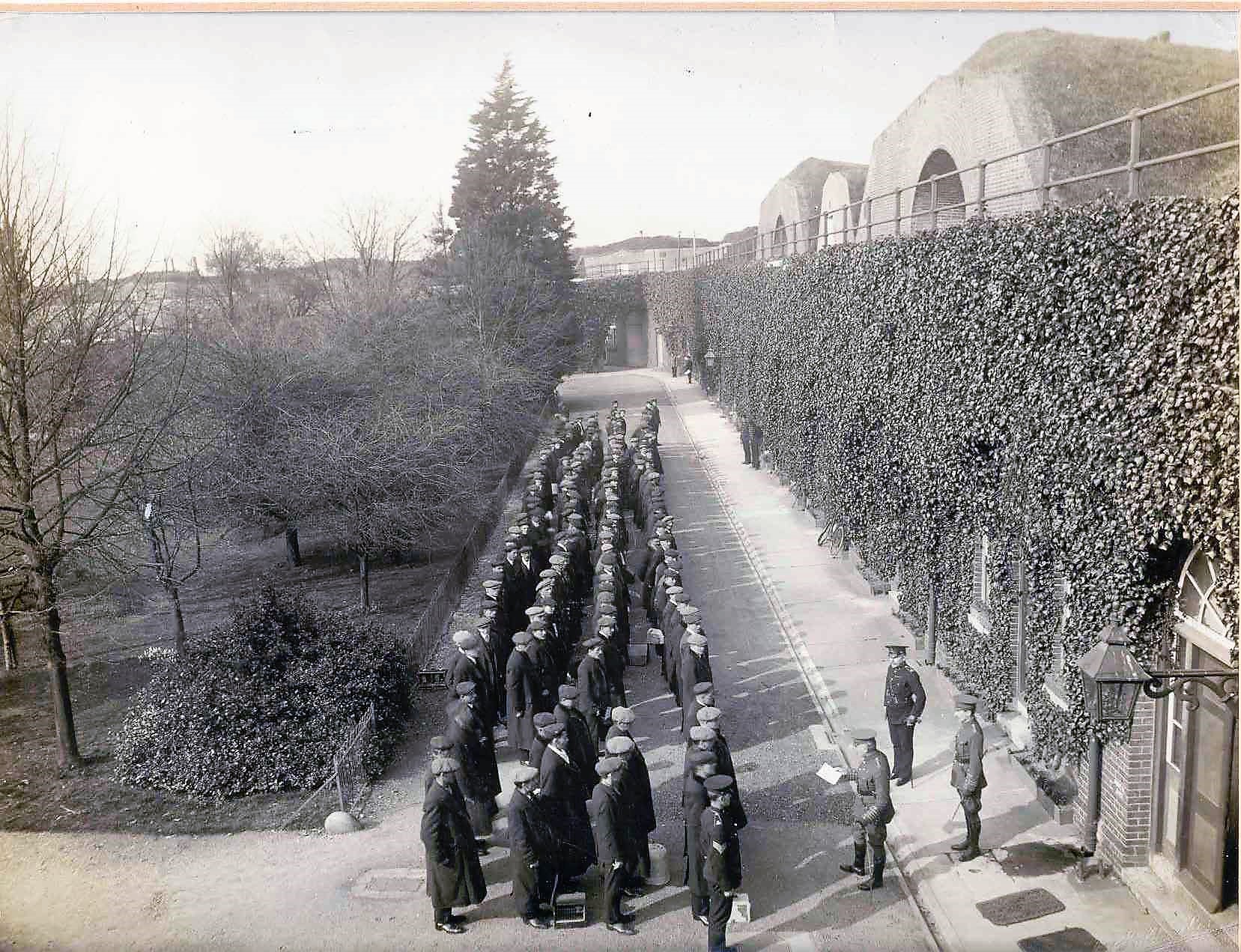 A Heritage Lottery Fund grant of £10,000, through the First World War: Then and Now programme, was awarded to us Gosport Heritage Open Days for this project. The aim was to increase public awareness of Gosport’s contribution to the war effort and the history of the final year of the First World War.  Local people came together to research and preserve the memories of the area at the time.

The focus of the project was Fort Brockhurst in Gosport as it was used as a demobilisation station in 1918. An archive of First World War photographs and records were made available for research.

Early in 2018, local community groups, with participants drawn from a wide range of ages and abilities, took part in twelve workshops.  Also, during Heritage Open Days in September 2018, children visiting Fort Brockhurst were able to get creative at WW1 themed drop-in workshops.

Here are some images from the workshops….

As well as crafting bunting and remembrance poppies, two audio pieces were recorded.

The music of ‘Peace at Last’ was composed especially for the project and local people joined in the singing. You can listen to this, against a backdrop of local period images by clicking the image below… 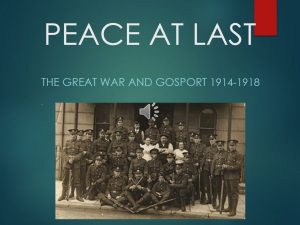 Children can be heard chanting a poem which was created in the project.  It contains strong and challenging questions posed by the youngsters of today. You can listen by clicking on the image below… 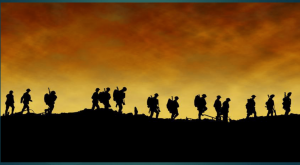 In an earlier project, two textile pieces were made to depict WW1 period stories from Fort Brockhurst. 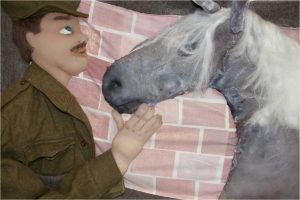 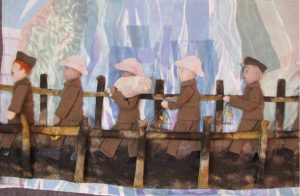 To compliment these, a final textile was made to represent ‘Peace at Last’.  This depicts a Peace Party; a common celebration which was held by communities and neighbours in streets and halls all around the Country in late 1918-1919. 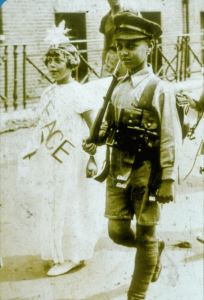 Interestingly, our research turned up only one photograph of peace celebrations in Gosport. This charming image of a young girl and boy in a Peace Parade at St Georges Barracks in Gosport in 1918 was found in The Gosport Society photographic archive.

Clare from Splodge Designs lovingly portrayed these real-life Gosport children as guests at our textile Peace Party.  Can you spot them? 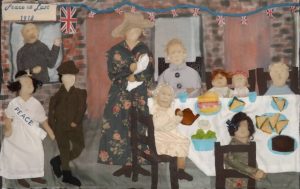 This wonderful new sensory textile (you can almost taste the jam in the sandwiches) was unveiled at the project finale, a Peace Party held at Fort Brockhurst, just 100 years (and a week) after the end of the Great War on 11th day of 11th month in 1918.

Participants from some of the workshops attended the party, along with local dignitaries such as our Mayor, our MP and the leader of Hampshire County Council. Members of ‘Ubique Right of The Line’ living history group came dressed as WW1 soldiers, nurses and civilians.  They had period artefacts for people to handle and learn about. There was also a display of Bruce Bairnsfather’s cartoon characters and ‘comic’ situations from WW1.  The bunting adorned the hall, along with displayed artwork and information from all three WW1 projects, creating a party atmosphere.

Following an overview of the project, the ‘Peace at Last’ song was played to background images of Gosport, the children’s Chant listened to, the Peace Party textile unveiled, then everyone settled down at long tables for a delicious party tea.  See some images here…

The soldiers practised their drill out on the Parade Ground of the fort before the event was brought to a close by some lively sing-along to popular period tunes.  All guests went away with a Study Pack.

Our findings from all three of our First World War commemorative projects have been gathered together into a single Study Pack containing a hard copy of this booklet, a copy of The Gosport Gazette and also a CD with the audio tracks.  These are available to schools or any groups who wish to explore our local heritage resource. To further compliment this, all of the creative materials such as textiles, information panels, interactive boards and timeline banners are available to loan on request.

Our online resources are freely accessible for everyone to enjoy and learn from. 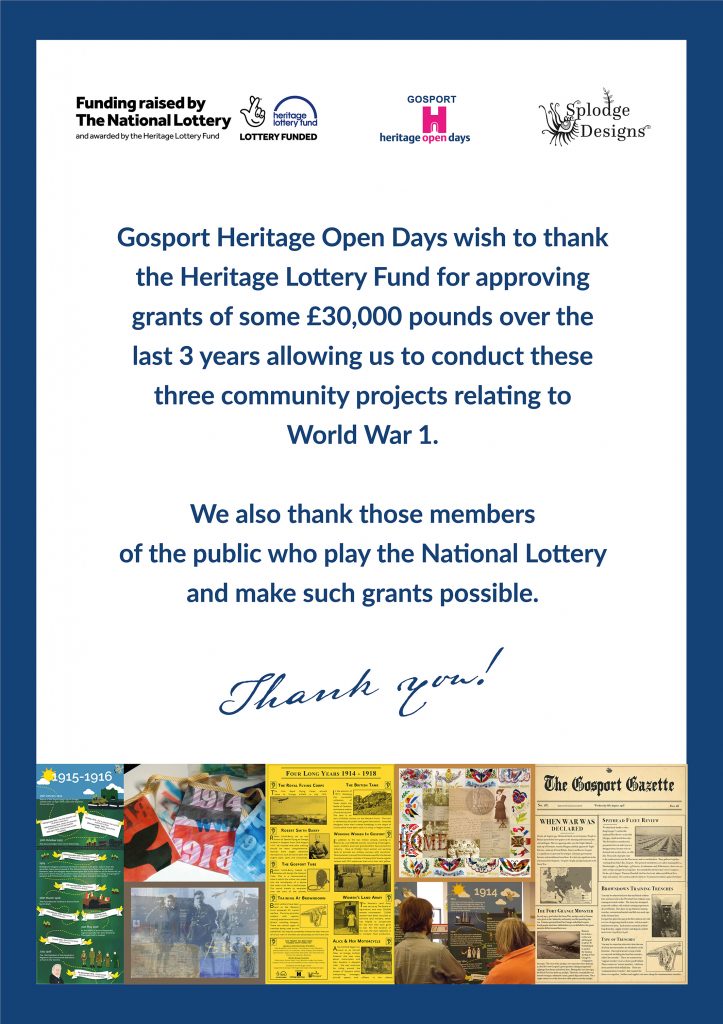