A sad farewell to HMS Illustrious, click the links to see her ‘launch’ and her ‘final journey’. 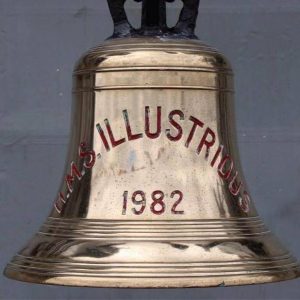 A short History of HMS Illustrious

HMS Illustrious was the second of three Invincible-class ships constructed in the late 1970s and early 1980s. She was the fifth warship and second aircraft carrier to bear the name Illustrious, and was affectionately known to her crew as “Lusty”.

In 1982, the Falklands conflict  meant that Illustrious had to be completed and rushed south to join her sister ship HMS Invincible and the veteran carrier HMS Hermes. She was commissioned on 20 June 1982 at sea en-route to Portsmouth Dockyard to take on board extra stores and crew.

She arrived in the Falklands to relieve Invincible on 28 August 1982 in a steam past. Returning to the United Kingdom, she was not formally commissioned into the fleet until 20 March 1983.

After the Falklands War, she was deployed  in Iraq, then in Bosnia during the 1990s and  in Sierra Leone in 2000. An extensive re-fit during 2002 prevented her from involvement in the 2003 Iraq War, but she was repaired in time to assist British citizens trapped by the 2006 Lebanon War.

Following the retirement of her fixed-wing British Aerospace Harrier II aircraft in 2010, Illustrious operated as one of two Royal Navy helicopter carriers.

After 32 years’ service, the oldest ship in the Royal Navy’s active fleet was  decommissioned on 28 August 2014.  Despite the UK Ministry of Defence’s announcement in 2012 that, once decommissioned, Illustrious would be preserved for the nation, two years later she was sold for demolition in Turkey.