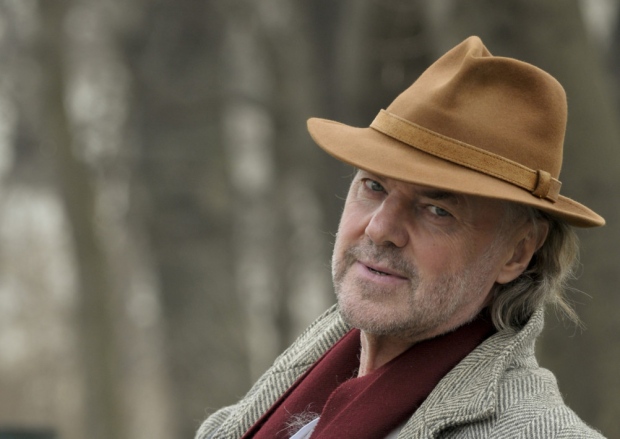 By his own admission Stephen Weeks was an unusual child.  As a schoolboy he asked his barber to cut his hair in the style he had spotted on a Roman bust.  And when he entered the world of work in the Carnaby Street-inspired London of the 1960s, he turned up at the office in the garb of a Swedish hussar.

But had he not been a little quirky, much of Britain’s heritage might have crumbled beneath wreckers’ balls or bulldozers’ blades.  And he might not have risen to international stardom (or ‘notoriety’ depending on your standpoint) 50 years ago.

As an 11-year-old he had developed such an interest in Roman Britain that he spent all his holidays on the excavation of Fishbourne Roman Palace on the outskirts of Chichester. He was one of the first to clear the earth from the famous boy-on-a-dolphin mosaic floor, the first time it had seen the light of day for getting on for 2,000 years. That was between 1960 and 1962 when he had already become the youngest, by far, member of the Society for the Promotion of Roman Studies (an offshoot of London University).

He was a pupil at Portsmouth Grammar School and Stephen was beginning to acquire a reputation among his peers. ‘Yes, I suppose they must have considered me a little odd, eccentric even,’ says the now 66-year-old from his home in Prague (yes, the capital of the Czech Republic, but more of that later).

Although born in Grimsby, his family moved to Portsmouth when he was four months and the city and its hinterland is still his spiritual home. But it was a move they were to make in 1962 when he was 12 which was to shape the rest of his life.

For they quit Portsmouth and settled across the harbour in Gosport. ‘That’s where I found that the largely intact 18th century Regency seaport was gradually being demolished by a council which wanted to replace it with large tower blocks of ‘‘system-built’’ flats modelled on those seen by a visit of town councillors to communist Moscow.’

By 1964 Stephen had acquired an interest in Henry Cort, the Gosport ironmaster who invented the puddling furnace and the rolling mill. He became active in trying to save Cort’s Gosport ironworks (appearing on the BBC’s first Industrial Archaeology series in 1965 and conducting probably the first industrial archaeological excavations at Funtley Iron Mills, near Fareham in the summer of 1964).

He also rescued Titchfield Market Hall and lock-up from demolition which was later moved to the Weald and Downland Open Air Museum north of Chichester.

But it was The Hall Affair back in Gosport which thrust Stephen into an international media maelstrom. He says: ‘I was desperately worried about the demolition of Georgian Gosport, so late in 1964 I wrote to Gosport’s town clerk warning them that if they tried to demolish The Hall, a protected and handsome early 19th century house facing the late 18th century former governor’s residence which had been visited by Jane Austen, I would take action.’ The council couldn’t be bothered to reply, but demolition of The Hall close to Holy Trinity Church did start covertly on a Sunday in January 1965. ‘Unknown to Gosport council, I was in the choir at the church and could see the smoke from the bonfire.’

He persuaded Portsmouth conservationist Freddy Emery-Wallis to ring the mayor of Gosport reminding him The Hall was a building ‘listed’ by the Ministry of Housing and Local Government, and that demolition was illegal. ‘In a panic, the mayor got confused and thought he was speaking to the minister and he immediately called off the demolition workers.’

The next day Stephen skipped lessons at PGS, took a train to London and somehow gained access to the minister, Sir Duncan Sandys. ‘I told him that no fewer than 56 listed buildings had been demolished in Gosport since 1947. He listened with great interest and I was passed on to Anthony Dale, the ministry’s chief investigator

‘By the time I arrived back at Portsmouth Harbour Station that evening there were already Evening News placards stating ‘‘Youth Blocks Demolition’’.  ‘I was in the media spotlight and the story was printed round the world with letters of support coming from Sir John Betjeman and others, as well as from people in many countries who felt the drive for post-war modernism was destroying their heritage.’

In Britain several conservation societies began as a result and many activists were encouraged by Stephen’s action.

However, The Hall had to be demolished because the work had started. But the Governor’s Residence (as Holy Trinity rectory) was saved, although Henry Cort’s historic ironworks was demolished.

Stephen enjoyed getting his message across and discovered a natural talent for television – on both sides of the camera. ‘While The Hall Affair was going on I was asked to appear on Southern Television’s evening magazine programme Day by Day. I was picked up by a car from Portsmouth Grammar School, driven to Southampton and appeared live with the mayor of Gosport. ‘There was I, a 16-year-old schoolboy doing battle with the mayor who turned up in his three-cornered hat and robes. I was told it made marvellous viewing and they asked me to make a series of films for them about conservation problems in the area. ‘By now I’d seen how producers worked and I thought ‘‘I could do that’’ and persuaded them to let me direct them. I was probably the youngest person to be professionally employed as a film director.’

When he was 25 he bought and restored Penhow Castle, near Chepstow in Wales, a fortress from the early 12th century and the oldest lived-in castle in Wales. ‘Only part of it was habitable, but when I sold it in 2003 I’d furnished it so each part reflected the time it was built from the 12th to the 19th century, and opened it to the public. ‘Preserving old buildings was my passion and it was all thanks to Gosport.’

Stephen Weeks now lives in Prague where he restores castles both in the Czech Republic and across central Europe. He moved there having sold Penhow Castle in Wales in 2003.

But he spent most of his adult life in the advertising and film industry. In the 1980s he lived mostly in Hollywood where he developed scripts within the studio system. He rewrote his original script of Sir Gawain and the Green Knight casting Sean Connery as the Green Knight and remade it as Sword of the Valiant.

When he left Portsmouth Grammar School he skipped university. ‘I went to London and became a producer and director of experimental commercials for the J Walter Thompson advertising agency,’ he recalls. ‘It was the Sixties and the most marvellous atmosphere. The whole Carnaby Street thing was in full swing and I remember turning up to work dressed in the uniform of a Swedish hussar.’

In 1967-68, in his spare time, Stephen made three short films, one of which, Flesh, won a prize at the Locarno International Film Festival in 1968. These led to his first cinema film, 1917, for which he had to reconstruct the battlefields of the Somme. ‘I did this using a derelict zinc works in the lower Swansea valley. ‘Dead trees were imported from those killed by fumes from the nearby Port Talbot copper smelter.’ The film was seen by an impressed Christopher Lee and eventually led to Stephen’s first studio picture I, Monster in 1971, a version of the Dr Jekyll and Mr Hyde tale. It starred Christopher Lee and Peter Cushing in what many fans regard as their finest roles.

Credits to Chris Owen, The News