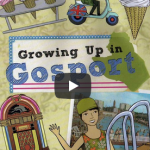 ‘Growing Up In Gosport’ was filmed in 2010 by a group of young people who attended the EDGE project in Gosport. The EDGE was set up to encourage young people to engage in cultural spaces such as museums, galleries, and libraries and to develop their skills in digital media, filming, interviewing, curation, and event management. I had the pleasure of coordinating various projects for the EDGE over 4 years and was honoured to have the chance to work with an amazing people group of young people. We can all relate to being young and this film set out to highlight the similarities rather than differences between generations. This project was particularly special as we had the opportunity to work across the generations, spanning almost 70 years of history, and also had the privilege to listen to stories of what life was like living in Gosport as a teenager in the past.