Skip to content
In the late 1960’s-early1970’s, a group of young Gosport friends held a club in the basement of the Holy Trinity Vicarage. It was called The Gosport Arts Lab. In this project, people are seen in the Club using ‘free-form design’ to create an artwork on massive lengths of paper. The finished work was later taken to Stokes Bay and Stanley Park in Gospo 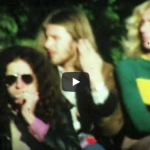 rt where lots of fun was had in actively displaying it and, ultimately, destroying it. This short film epitomises life in the late ’60s-’70s, through the style of clothing, long hair, creative flair, ability to make ones own entertainment, great friendships formed, and the desire to engage in such weird community activities. This was filmed and edited by one of the group, Charlie (Chas) Old. With his permission, this can be seen for the first time ever by the general public, for Gosport Heritage Open Days 2020. Run time: 5:46 Please, do not copy this without permission. Email your request to online@gosportheritage.co.uk and it will be passed to Charlie to consider.

29 The Nature of Gosport during Lockdown – a community view

Have We Got OLD News For You! – BRITISH MOVIETONE NEWSREEL