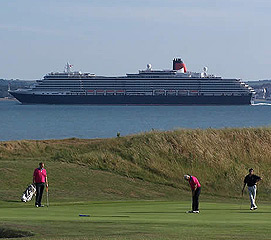 In his book “British Golf”, Bernard Darwin says that in the 1880’s there were only forty six golf courses in England, nearly all by the seaside.  Inland golf, he tells us, was at that time considered no more than a poor substitute for the real thing, a second best to be played not over links but on glorified meadows of extreme muddiness; it was not until nearly the turn of the century that the potential for golf of the waste country of sand and heather and bracken, fir trees and silver birches, such as is found in Surrey and North Hampshire, was realised.

The gold club at Haslar, founded in 1885, must have been one of these forty six; indeed it must be one of the oldest clubs in the South of England, many years senior to well-known clubs such as Wentworth and Sunningdale.  Records of its very early history are scant, but a certain amount is recorded in two handbooks of the club compiled by Robert Browning and Tom Scott some twenty years ago.

The club was originally a purely Service venture, nine holes laid out on Haslar Common to provide recreation for officers of the Royal Navy and Army stationed in Gosport and Portsmouth and known as the United Services Club.  It extended from the walls of Haslar Hospital and Barracks round Fort Monckton to Fort Gilkicker, and the original clubhouse which forms the back part of the course that later had to be given up.

In 1893 the ladies of Alverstoke caught the golf bug and started a nine hole course of their own on forty acres of waste land, mostly shingle and gorse, to the west of the Long Water.  This must have been a very short course, for in the nineties it was not 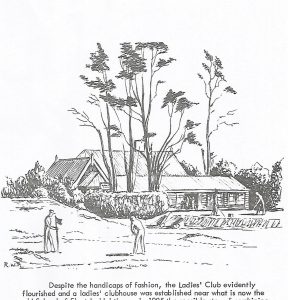 deemed proper for the ladies to drive the ball more than seventy or eighty yards.  “Not because we doubt a lady’s power to make a longer drive”, wrote Lord Wellwood in 1890, “but because that cannot well be done without raising the club above the shoulder.  Now we do not presume to dictate, but we must observe the posture and gestures required for a full swing are not particularly graceful when the player is clad in female dress”.  This dictum might well be thought a piece of male arrogance, but there was some justification for it as the ‘female dress’ comprised a sailor hat, a high stiff collar, and a voluminous skirt and petticoats.  Indeed a lady golfer of those days had described the measures which ladies had to take to make it possible to hit the ball at all: “I can remember when sleeves were so voluminous that we always had to have an elastic strap round the left arm or we would never have been able even to see the ball, and ‘Miss Higgins’ was an indispensable aid.  ‘Miss Higgins’ (named after a well-known American lady golfer) was an elastic band which was slipped round the knees when the player was addressing the ball to keep the skirt out of the way.”

Despite the handicaps of fashion, the Ladies’ Club evidently flourished and ladies’ clubhouse was established near what is now the old School of Electric Lighting.  In 1905 the sensible step of combining the two course was taken, the men and ladies pooling their resources to maintain an eighteen hole course, but this was clearly only a marriage of convenience for the two clubs remained distinct, each with its own clubhouse, until 1924.  In that  year the marriage was at last consummated the ladies’ small clubhouse being bodily transported (no doubt as a military exercise by the Sappers) from the extreme Western end of the course and joined on to the back of the men’s clubhouse to make a new front facing Gilkicker and looking out over the first tee and eighteenth green.

The year 1924 saw another revolutionary change in the club’s constitution.  From its inception it had been a purely Service club, predominantly Army, for Gosport was then quite an important garrison town. A sprinkling of distinguished civilians had been admitted as honorary members, but their number was strictly limited and they had to stand for re-election every year.  In 1924 civilians were for the first time admitted to full membership and the restriction on their numbers was lifted, but for another ten years the club continued to be known as the United Services Gold Club and it was not until the mid-thirties that the name was changed to its present one, the Gosport and Stokes Bay Golf Club.

The club’s association with the Borough was marked two years later by a formal resolution to invite the Mayor of Gosport to be an honorary member, and was further strengthened in 1939 when a handsome silver cup was presented to the club in memory of Colonel Elles, for many years Captain and honorary secretary of the club and also a Justice of the Peace, to be played for annually in a match between the club and team raised by the Mayor.

The Borough has one very good reason to take pride in its golf club, for the club was a unique claim to fame as the birthplace of that legendary figure Colonel Bogey.  In the clubroom hangs a framed page from ‘Golf Illustrated’ of the 17 November 1905, which tells the story, in 1890 the Coventry Golf Club, in order to provide a change from the customary match play, introduced a novel from of competition in which members played against what was called the ‘ground score’ – the number of strokes that a first class golfer, playing steadily, would be expected to take at each hole.  The idea was adopted by a few other clubs, and one in particular, Great Yarmouth, was enthusiastic about it, At that time the music hall song ‘Hush, Hush, Here Comes the Bogey Man’ was all the rage, and the ‘ground score’ came to be known as the Bogey Man at Yarmouth.

In the Spring of 1892, the Secretary of Great Yarmouth Gold Club, Dr Thomas Browne, RN, came to Alverstoke and played at the United Services Club.  He introduced the Bogey Man to the honorary Secretary, Captain Seely Vidal, RE, and they worked out a ground score for the course and, together with Dr Walter Reid, RN, set to play against this imaginary opponent.

Just as they were starting the match Captain Vidal said: “Stop!  We must proceed in a proper Service way.  Every member of this club had a Service rank.  Our new invisible member, who never makes a mistake, must surely be a Commanding Officer.  He must be a Colonel, ‘Colonel Bogey,’” said he, saluting, “delighted to find you on the links Sir” – adding “I couldn’t very well say see you on the links.”

Captain Vidal was so attracted by the idea of having a ground score against which golfers could measure their prowess that he wrote to The Field and Gold magazine describing the system of playing against the mythical Colonel Bogey, and the idea of Bogey competitions caught on; within a few years every golf course had its official bogey score for each hole printed on the card.  The Colonel was further immortalised in 1914 when the then Director of Music, Ricketts, at the Royal Marine Barracks wrote under the pseudonym of Kenneth Alford the still popular march tune ‘Colonel Bogey’.

Nearly thirty years later Bernard Darwin played a round at Haslar and wrote a delightful article, full of praise for the charm of the course, in The Times of 2 December 1933.  In it he described how Coventry’s idea of a ‘ground score’ was christened ‘the Bogey Man’ at Yarmouth and eventually given the rank of Colonel at Haslar and from there launched on the career that was to make him the best known and most feared golfer of all time.  Darwin expressed surprise that Bogey was no more than a Colonel; he felt that he should have at least an Admiral or a General, even an Admiral of the Fleet or a Field Marshal in recognition of his ability to do a steady score on such a challenging course on which water and gorse presented so many hazards.

Darwin’s visit was historically significant in that he mentions that he was partnered in a four ball match against and Admiral and a Captain by the first civilian ever to be elected Captain of the United Services Club.  The records reveal that the Captain in 1933 was Dr W H Lamplough, still well remembered in Alverstoke.

Gosport and Stokes Bay Golf Club, which started life as the United Services Club, is a robust and thriving octogenarian.  The eighty six years of its life have seen various developments in the game.  With the aid of machinery and chemicals course 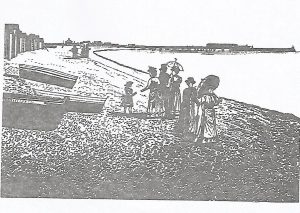 maintenance has become very much more sophisticated, the modern ball travels further and the old hickory shafted clubs have been superseded by the more powerful and precise steel and aluminium shafted weapons today.  But by far the most noteworthy development is the rapidly growing popularity of the game; when the club was founded, golf in England was played only by the so called leisured classes, elderly gentlemen and few exercise minded eccentrics like officers of the Army and Navy; now it is enjoyed by young and old from all walks of life, and the pressing need for more and more golf courses is recognised.  It would be a sad day for Gosport if ‘development’ is allowed to encroach on this lovely open space which provides recreation for so many.