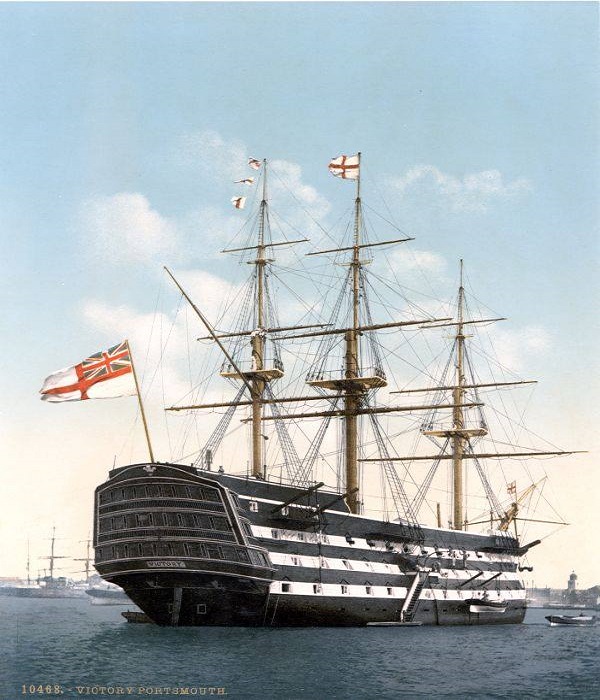 Today in Gosport’s Past:-  on 7 November 1812, Nelson’s flagship HMS “Victory” was moored at Gosport – the beginning of a very long and meaningful relationship with 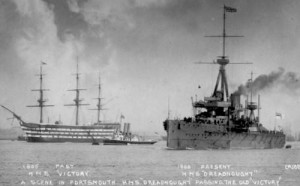 the town which lasted until the day she was towed into the dockyard to be put in dry dock on 12 January 1922 – the best part of 110 years, in which time, despite being moved around to various locations, she was continuously moored at Gosport.

As a consequence of this, it’s a fact that all, and any, photographs of HMS “Victory” afloat were taken at Gosport, or on tow from Gosport to the dockyard. Cameras as such hadn’t yet been invented when she was first moored at Gosport – do the math (unquote)! Her arrival at Gosport, initially as a depot ship, marked the end of her active, and extremely distinguished, career, and only just over 7 years after the Battle of Trafalgar (19 October 1805).

After a few years, “Victory” was more or less forgotten about by the navy, although she drew many sightseers to the harbour (local boatmen were more than a tad miffed when she was put into dry dock, as they made a pretty penny from ferrying visitors to view the ship). The story goes that when the First Sea Lord (Thomas Hardy) gave his wife the news that his received orders instructed him to arrange for “Victory” to be broken up, she burst into tears, and insisted he returned to Admiralty House and did something about it; whether this story holds water is debateable, but it IS a fact that the page of his duty log containing the orders of the day has been ripped out – this was in 1831. The ship was paid a visit in 1833 by Princess Victoria (soon to be Queen) and her mother, the Duchess of Kent.
In 1889, the ship was fitted out as a Navy School of Telegraphy, soon becoming a bona fide Signalling School, where ratings were sent to for a two-month signalling course. This continued until 1904, when HMS “Hercules” temporarily took over the role, which ended in 1906, when the school was transferred to the Royal Naval Barracks in 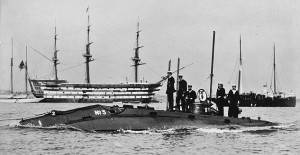 Portsmouth. Meanwhile, “Victory” remained moored at Gosport, and had a narrow escape in 1903, when HMS “Neptune”, being towed out of the harbour for breaking, showed her dislike of such an idea, and broke free from her tow, in the process ploughing into “Victory”, creating a 7 foot by 3 foot hole below the waterline. “Victory” was only saved from sinking on the spot by emergency repairs, but she was by now in a very poor state of disrepair, and only King Edward VII’s intervention prevented the Old Lady from being broken up.

Ironically. the ship which nearly caused “Victory” to sink bore the same name as the older ship which had towed “Victory” to Gibraltar after the Battle of Trafalgar had disabled “Victory”. Eventually, she was considered to be unfit to be afloat, and so the dry dock beckoned.
HMS “Victory” is today the oldest commissioned naval ship anywhere in the world, and all Royal Navy personnel, whether service or civilian, who are not posted aboard a ship, are on record as being posted to HMS “Victory” – even if they work in a London office. Not a lot of people know that. 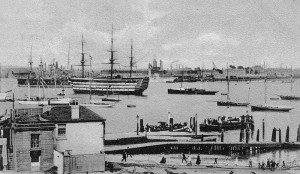 HMS “Victory”:- a 104-gun First Rate Ship of The Line, ordered on 13 December 1758, laid down on 23 July 1759, and launched (undocked, in actual fact) at Chatham on 7 May 1765. Too large to launch, she had been built in dry dock No.2 (now ‘Victory Dock’), and the dock was flooded so she could be floated out. Early in the morning of the ‘launch’, shipwright Harty Larkin, the designated ‘foreman afloat’ had misgivings concerning the width of the ship – as soon as it got light, he checked, and found that his suspicions had been warranted – the ship proved to be approximately 9.5 inches wider than the dock gate entrance. He told the master shipwright, John Allin the news, who considered abandoning the launch, but Larkin asked for, and recieved, the assistance of every available shipwright, who all helped to shave off (using adzes) sufficient wood from the gates to allow “Victory” to pass safely through. No little task. Larkin petitioned the Navy for some reward for his actions, but was turned down. Meanies! And not a lot a lot of people know THAT, either… Here are some relevant photos; credits to original photographers, as ever.

ALSO Today in Gosport’s Past:-  on Monday 7 November 1966, CREAM, the first ‘supergroup’ played in the ballroom at Thorngate Halls. Eric Clapton, Ginger Baker, and the now late Jack Bruce. I was there. This was the night my entire outlook on music took a complete change of direction…. and all for six bob (that’s 30p in feet & inches). The promotor, Ricky Martin, told me that he lost money on the evening, as only 70 turned up to see the group – Ricky had overlooked the date coinciding with Titchfield Bonfire!
Cream’s first performance was on 29 July 1966 at the Twisted Wheel club, and the official debut was two days later on 31 July at the 6th National Jazz & Blues Festival at Windsor. Their first single “Wrapping Paper” was released in October 1966, and managed to get into the charts, despite being totally unlike anything Cream played live. Just 8 days after performing at the Thorngate Halls, Cream played at Klook’s Kleek Club in London, and a bootleg album was made of the performance; naturally, I managed to obtain a copy of this mono recording, which I still have – blank white cover, blank white record centre (apart from my listing of tracks with the aid of my John Bull printing outfit), and numbered 001. Their first album “Fresh Cream” was released in December 1966, and spent many months at, or close to the top of the British album charts.
The animosity between Jack Bruce and Ginger Baker was legendary, and was a factor which would fuel the decision, in May 1968, for the group to split, and after a farewell tour of the USA, a last concert was arranged at The Royal Albert Hall on 25 November 1968, for which I managed to get tickets. Owing to overwhelming public demand, a second concert at the same venue the following day, 26 November. So – I didn’t get to see Cream’s FINAL performance, just their penultimate one. On 25, I saw Eric Clapton playing a Gibson ES335, the following night he used a Gibson Firebird.
I also managed to see Cream topping the bill at the 7th National Jazz & Blues Festival at Windsor on 13 August 1967 – what an incredible end to a brilliant festival! Other bands (or ‘groups’ as we called them in those days) performing over the three days included Jeff Beck, Fleetwood Mac’s first performance, Ten Years After, Aynsley Dunbar Retaliation, John Mayall’s Bluesbreakers (Mick Taylor on guitar), Chicken Shack (who I missed), Arthur Brown (ditto), Pink Floyd, Small Faces, The Move, Eric Burdon & The New Animals, Pentangle, Donovan, Blossom Toes, Tomorrow (Steve Howe on guitar), The Syn, P P Arnold & The Nice, Al Stewart with Steeleye Span, Timebox, Alan Bown, Marmalade, Zoot Money’s Dantalion’s Chariot (with Andy Summers on guitar), Amen Corner (missed), and Paul Jones (missed), not to mention a whole bunch of jazz acts I either didn’t see or took little notice of, not being much inclined in that direction. What a weekend!
However, I digress. Cream reformed briefly for a series of 4 concerts at The Royal Albert Hall on 3-6 May 2005, which I didn’t know about until after they’d taken place. However, seeing Cream at the Thorngate in 1966 changed my musical outlook forever; until then I’d been keen on pop music in general, and especially soul & Tamla Motown – being influenced in that direction by great performances of such music by local group Simon Dupree & The Big Sound, and the likes of The Gass, regulars at Thorngate Halls. Sadly, bassist Jack Bruce died on 25 October 2015 at the age of 71. While I’m at it, I should give some mention of other acts who’ve performed at Thorngate over the years, some of which may surprise a few people:- ELO’s Jeff Lynne played there with his group The Idle Race; Van Morrison (with Them), Dave Dee, Dozy, Beaky, Mick & Tich (formerly Dave Dee & The Bostons), Elton John (as Reg Dwight) with Bluesology and filling in with Simon Dupree, The Yardbirds with Jeff Beck, Rod Stewart with Shotgun Express with Peter B’s Looners (which included Peter Green, Mick Fleetwood, and Peter Bardens – later of Camel; Kenny Ball, Nat Gonella, The Walter Trout Band, Manfred Mann, the final performance of David Bowie & The Buzz, Big Jim Sullivan & Duncan McKenzie, Polly Bolton Band, The Hollies, Lulu & The Luvvers, Show of Hands, The Creation, and of course, my own band Vince’s Teeth – so I’ve had the pleasure of performing on the same stages as all those mentioned…