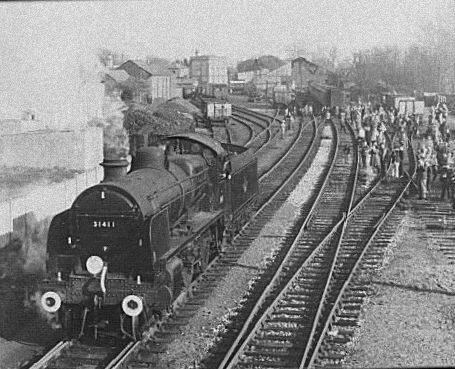 Today in Gosport’s Past:-  on Monday 6 January 1969, all train services to Gosport station had come to an end.

Since the end of passenger services (as of 8 June 1953), there had still been goods trains to/from Fareham on a fairly regular basis, but the last goods train (if indeed it operated that day) would have been on Friday 3 January, it being customary for such closures to take effect either on the first day of the month, or from the Monday, despite the fact, certainly in this case, that no goods trains would be run over the weekend.

Soon afterwards, track was lifted from Gosport as far as Holbrook, where a length of track (to as far as east of Turner Avenue) was necessary to enable the transfer of wagons from the RNAD establishments at Priddy’s Hard, Frater and Bedenham, via the connection at Frater Gates, where there was a level crossing on Fareham Road. These services, which saw transfer of munitions between Gosport and the MoD depot at East Dean, were a once-a-week operation for many years, but towards the end (1989), these became ‘as required’. The last train from Priddy’s Hard operated on 14 January 1986, with Priddy’s Hard itself being closed & sold in 1988.
The branch line to Gosport (mooted as a connection to Portsmouth) was approved by an Act of Parliament as early as 1839, and was the very first branch line of The London & Southampton Railway, which, upon being granted approval for the Gosport line, immediately changed its name to The London & South Western Railway, so the Gosport line (from Bishopstoke – later Eastleigh) was actually the very first branch line of that company, which later operated all trains in & out of London Waterloo to destinations at Portsmouth, Bournemouth & Weymouth, Salisbury, Reading (Southern), Exeter , and various parts of Cornwall.

The line to Gosport SHOULD have opened on 26 July 1841, but owing to problems with landslips, and a dodgy tunnel near Fareham, the line wasn’t officially opened until 7 February 1842, although the first trains ran on the line on 24 November 1841, including a troop train from Winchester, but more landslips occurred. Nevertheless, the official date was still less than 8 months after the GWR London to Bristol line opened.

The line from Fareham to Cosham opened on 1 September 1848, and extended to Portcreek junction to connect with Portsmouth on 1 October 1848. Gosport was part of Britain’s earliest railway system, but as we know, it was ultimately a sad failure – a terrible shame, with its history; Prince Albert travelled by train to Gosport on 8th October 1843, and Queen Victoria made her first train journey to Gosport on 14th October 1843, when she accompanied Louis Philippe back to France; Albert had greeted him on his arrival in Gosport.

The longest length of copper wire in Britain ran along telegraph poles between Admiralty House, in London, to Gosport from 1 April 1845, and Clarence Yard (once the line had been extended through the town ramparts, opened on 13 September 1845), so as to be able to send semaphore signals to HM Dockyard.
Passenger services to & from Gosport ended on 8 June 1953 – exactly one week before the Queen’s Coronation Fleet Review at Spithead on board HMS “Surprise” (a converted frigate – HMY “Britannia” wasn’t yet ready), and some 80 plus extra trains were laid on for the occasion.

Rather a lack of foresight there, if you ask me…. Goods & parcels services ceased on 6 January 1969; during the mid-sixties, an average of 84,000 parcels were handled at Gosport station annually. Not as of today 47 years ago…. Credits to original photographers.

ALSO Today in Gosport’s Past:- on 6 January 1915, aircraft of the Royal Flying Corps (RFC) made a return to Grange airfield.

The first RFC aircraft had arrived at Grange on 6 July 1914, but their stay had been brief, since World War 1 began on 28 July, and they were sent off for action in France soon after.

The airfield saw little use until the Royal Navy Air Service (RNAS) based their aircraft at Grange from October 1914 until sometime around January 1915 – probably until the RFC returned. Grange continued under RFC control until the formation of the Royal Air Force (RAF) on 1 April 1918, at which time the airfield became RAF Gosport.  The RFC & RAF staff & aircrews were billeted in the barrack rooms at Fort Rowner, and possibly Fort Grange.
A significant event in 1917 was Robert Raymond Smith-Barry’s invention of a speaking tube, whereby the pilot could communicate with a trainee pilot, at the School of Special Flying, which was at Grange Airfield, being formed from 1 Squadron (reserve), of which Smith-Barry had been the commander since returning from action in France in December 1916. He’d been concerned about the lack of flying skills of the British pilots in France, and developed his own teaching methods. These were put to good use at the School of Special Flying, which was set up to teach pilots to become flying instructors.

A number of Avro 504 biplanes had been donated by the Avro company for the purpose, but Sopwith Pups were also used, possibly others. The speaking tube soon became universally known as ‘The Gosport Tube’. He’d performed experiments with the equipment at his home, Alverbank House (1917/18), where he lived with his wife, and which he used as an officers’ mess for officers from Grange. The School of Special Flying was later incorporated into the Central School of Flying, and the RAF Gosport school continued for some years, Barry-Smith’s teaching methods were greatly acclaimed, and were utilised by air forces throughout the world. A very important figure in Gosport’s history, and a blue plaque was attached to the Alverbank Hotel (his home in 1917/18) in 2014 to commemorate his achievements.
Even though never being a major airfield, Grange (aka RAF Gosport), still maintained & flew a fair number of aircraft, mostly as part of the School of Special Flying/Central School of Flying; in an aerial photograph taken in July 1929, around 35 biplanes of at least three distinct types can be seen on the airfield. In 1940, the Air Torpedo Development Unit was formed here, and remained until 1956. Some of this torpedo work involved (mostly) Fairey Swordfish biplanes dropping experimental torpedoes into Stokes Bay, wherefrom the torpedoes would be retrieved by launches based at Stokes Bay Pier, which the Admiralty had purchased (or leased) from the LSWR after the closure of the railway line on 30 October 1915.
World War 2 saw a number of squadrons using the airfield, and some of the aircraft involved included Spitfire, Hurricane, Defiant, Swordfish, Blenheim, Hudson, Barracuda, and Beaufighter. After the end of the war, there were changes; on 1 August 1945, control of the airfield was passed to the Royal Navy, resulting in RAF Gosport becoming HMS Woodpecker – for just three days – it appears that a Royal Navy sloop had recieved that name in 1946, so it became HMS Siskin on 4 August 1945, with a small assortment of Fleet Air Arm aircraft, plus some Westland Whirlwind helicopters later on. This continued until the closure of the airfield in May 1956. Aircraft from the nearby HMS Daedalus continued to use the airfield occasionely for a few months after closure.
HMS Sultan came into existence on 1st June 1956 as a Mechanical Training and Repair Establishment. In 1965 work commenced on the building of the large Grange estate (most of it very recently demolished and rebuilt), much of which was built on the actual airfield. The offices of HMS Centurion were built at the north end, so nothing now remains of the airfield itself, although two of the original hangars are still in use, opposite the end of Cambridge Road.

It now hosts the Defence School of Marine Engineering, the RN Air Engineering and Survival School, the Nuclear Department, the Network Rail Advanced Apprenticeship Scheme, and the EDF Energy engineering maintenance apprenticeship. There are currently more than 50 helicopters on site, either in store, or for repair. Fortunately, both Fort Grange and Fort Rowner are still there, and more or less mark the southern and northern boundaries of HMS Sultan, excepting the officers’ quarters & the sports field. Now we hear that HMS Sultan is to close in a few years…
Credits to original photographers.

And ALSO Today in Gosport’s Past:-on 6 January 1883, Queen Victoria visited Haslar Hospital to present Commander C K Purvis RN with The Egypt Medal. Cmdr Purvis had been seriously injured during the fighting between British and Egyptian forces at Kassassin in August 1882.

Although I know little of the circumstances surrounding the events, the Egypt Medal was awarded to British and Indian servicemen involved in the conflict between 1882 and 1889, being 36mm in diameter and made of solid silver. I can’t imagine the thinking behind this particular presentation, I very much doubt that Victoria would have personally presented every medal, as they numbered thousands. I’ve also noted that the recipient in this case being referred to as Cmdr C K Kennedy-Purvis RN, who, later in 1883, married one Cecilia Harriet Lloyd, who he’d met in Egypt in 1882, where she was working as an Army nurse, and had possibly treated his injuries there. She was also awarded the Egypt Medal.

The couple had one son, who eventually became Admiral Sir Charles Kennedy-Purvis G.B.E., K.C.B., a Lord Commissioner of the Admiralty and Deputy First Sea Lord 1942-46. He died aged 62 in 1946. He was under two when Cecilia died in vague circumstances at Ramsgate Coastguard Station on January 26 1886, at the age of only 39.
Credits to original photographer & copper-plate etcher.