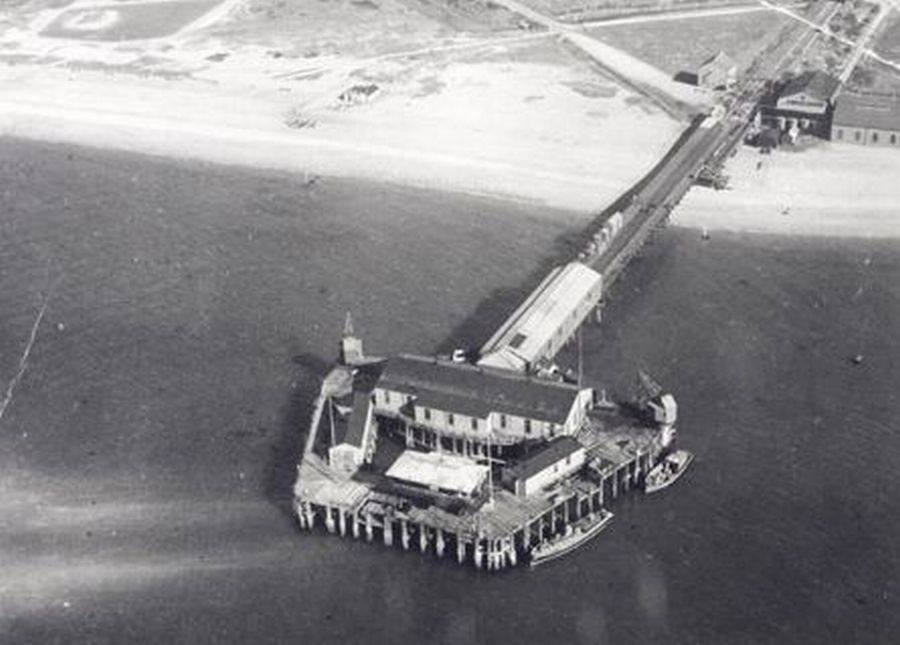 Today in Gosport’s past:- on 6 April 1863, the railway line from Gosport to Stokes Bay Pier was officially opened.
This consisted initially of a line from Gosport station to Stokes Bay Pier, with no intermediate stations. This gave the first railway/ferry connection to the Isle of Wight; passengers travelling via Portsmouth had to travel by coach & horses, or by foot, to Clarence Pier from the town station; this remained the case until Portsmouth Harbour station was opened in 1876, at which time the Isle of Wight steamers operated from there, as well as Clarence Pier. So, for 12 years, all was looking good for the Stokes Bay Railway, but unfortunately the number of passengers took a tumble from 1875. And that’s despite the Gosport avoiding line from Lees Lane junction to Gosport junction (Daisy Lane) being opened on 1 June 1865, which enabled trains from London and/or Bishopstoke (Eastleigh) to travel direct to Stokes Bay without the lengthy rigmarole of terminating at Gosport, running the engine around to the other end of the train, and so on. Of course, this meant that those direct trains didn’t call at Gosport, so an intermediate station was opened on the same date (1 June 1865) near Bury Road to allow passengers for Gosport town closer access than Stokes Bay. The station was named Stoke Road, changed very quickly to Gosport & Alverstoke, and ultimately named Gosport Road on 8 November 1866. The Stokes Bay line involved two viaducts, Workhouse Viaduct and Anglesey Viaduct (Alver Creek), two bridges crossing the moat south of Fort Road, and a bridge across the military road a short distance from Stokes Bay Pier; Bury Road Arch crossed the railway at the north end of Gosport Road station, and Clayhall Arch crossed the line in Clayhall Road. There were level crossings at Little Anglesey Road, Crescent Road, and Fort Road, with foot crossings in Daisy Lane, and St Mark’s crossing in Alverstoke. There was also a footbridge at Daisy Lane and Gosport Road station. Three signalboxes were to be found on this line; one immediately southeast of the road bridge at Stokes Bay, one immediately northeast of Anglesey level crossing in Crescent Road, and one at the south end of the up (west) platform at Gosport road station; there was a ground frame just northeast of the level crossing in Fort Road. Anglesey Viaduct was replaced by a single-span iron bridge in 1893, we all know this as Jackie Spencer’s Bridge. Passenger numbers continued to fall over the years, and on the outbreak of WW1, the IOW ferry service from Stokes Bay Pier was suspended immediately, and this was more or less the end of the line for the line (badoom tish), which closed on 30 October 1915. Credits to original photographers.