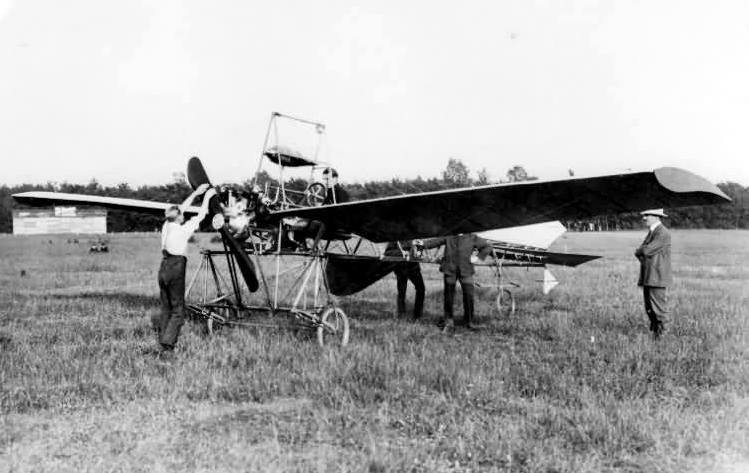 Today in Gosport’s Past:-  on 5 November 1910, local entrepreneur Vic Hutfield put his monplane up for sale at his garage at Brockhurst; this is the basic story of his

creation, which was rather a Heath Robinson affair, equipped with a JAP motorcycle engine, and bicycle wheels and

forks as undercarriage. I believe that the monoplane had been built elsewhere, and had been brought to Gosport by train (wings removed), and it’s worth mentioning that, despite other aircraft managing to fly before this, Vic’s plane is believed to have been the first to take off unassisted; previous successful flights having had the assistance of being towed, gravity, or being propelled into the air.
During 1909/10, Vic Hutfield teamed up with three other gentlemen to form the ‘RAS Aeroplane Co, Gosport’, using their names as the initials (Reader, Allen & Sheffield), and Vic Hutfield tried out his own-build monoplane at Grange. He also built the first aircraft hangar at the site in which to house his own aircraft; the roof of the early hangar was later used as a roof on his Brockhurst garage. The monoplane was ready for testing at Grange in July 1910. Several flights got off the ground but landings were rather unsuccessful, with Grange field being uneven, with potholes & puddles, and damage included breaking the propellor. After awaiting a new propellor for months, when it arrived it had been badly made, and couldn’t be used. When finally a new propellor had been fitted, after much fiddling about, a young lad offered to fly the plane, and it flew for several hundred yards, probably because of the light weight of the lad, who later became Air Vice Marshall Lywood. Later in 1910, Vic decided not to do any more trials at Grange, and instead, put it on display in his garage at Brockhurst, and it was something of a success. He put it up for auction on 5th November 1910, asking ‘£600 or nearest offer’. The asking price included ‘large new hangar, benches, vices, tools, with complete camp outfit for four persons’, and ‘free use of excellent flying ground with no extra expense’. The monoplane was know to be still in existence in 1964…… somewhere. Here’s a bunch of relevant photos; credits to original photographer.

ALSO Today in Gosport’s Past:- on 5 November 1860, John ‘Jackie’ Spencer (yes, ’tis he of ‘Jackie Spencer’s Bridge’ fame), married Jane Blake at Andover parish church; Jane was six years older than Jackie, and like Jackie, was born in Andover.

Jackie Spencer was born in 1838, and in 1854, at the age of 16, he joined the new railway company at Andover in an unskilled capacity. Since Jackie’s place of work had been transferred to Godalming, the pair of them set up home there; he was by then 22, and Jane was 28. They had a daughter, Ann, in 1864, and within three years, he had once again been transferred; this time to Alverstoke, where he held the position as the level crossing gatekeeper at Little Anglesey Road. The family lived in the gatekeeper’s cottage, the address being both No.1 Railway Cottage and 7 Little Anglesey Road, where they lived until his retirement, presumably this was in 1903.

In 1867 Jane gave birth to a second daughter, Esther, who was christened at St Mary’s church in Alverstoke. The gatekeeper’s position at Little Anglesey Road was a fairly new post, as the Stokes Bay Railway had only been opened as recently as 6 April 1863; apart from his regular gatekeeping duties, he had been instructed by the railway company to do what was necessary to prevent local housewives from stealing the large chunks of chalk which formed much of the railway embankment to the north of Anglesey Viaduct, and to stop small boys chucking the chalk around. It would appear that he put much enthusiasm into this aspect of his work, which is probably why his name has lingered on.

In 1898 the viaduct itself was replaced by a single-span iron bridge carrying two railway tracks across Alver Creek; this bridge still remains today, and is widely known by locals as Jackie Spencer’s Bridge, or the black bridge. The Stokes Bay Railway closed at the end of October 1915, and since the track was lifted (1922), the bridge has been a public right of way, and now forms part of the cycleway; in railway days a footbridge was attached to the bridge on the eastern side, connecting to the footpath leading to Clayhall Road. Although the footpath adjoining the bridge is long gone, the path from the beidge to Clayhall Road is still there today. Clayhall Road used to cross the railway over Clayhall Arch, a brick-built bridge which was demolished in 1960; the resulting rubble was used for the infilling of Stokes Bay moat.

The gatekeeper’s cottage was situated immediately north of the level crossing in Little Anglesey Road, on the eastern side of the tracks. Upon his retirement (presumably in 1903), Jackie & Jane vacated the cottage and moved into the house of their daughter Ann’s family home at 32 Park Road (now No.66). Ann had married George E Munday, a Royal Navy petty officer, in 1891, and they had made 32 Park Road their home. At the age of 22, Esther had married Walter James Munday (24), a carpenter & shipwright in Portsmouth Dockyard; he was the brother of George, so the two Spencer girls had married the two Munday brothers. Jackie died, aged 69, on Tuesday 7 May 1907 at 32 Park Road, with daughter Ann by his side. Cause of death would appear to have been a blood clot or a stroke. Following Jackie’s death, his wife Jane was, for reasons unknown, sent to the nearby Alverstoke House of Industry – to whit:- the Workhouse. It looks like the family didn’t get along… Jane died in the Workhouse in early April 1913, aged 80; she was buried in an unmarked grave next to her husband’s similarly unmarked grave in Anns Hill Cemetery on 10 April 1913; daughter Ann & husband George Munday are also buried at Anns Hill Cemetery.
Credits to original photographers.