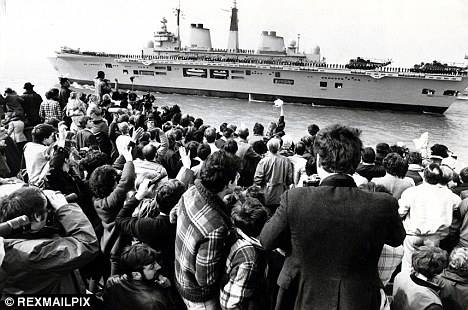 Today in Gosport’s Past:-  on 5 April 1982, thousands flocked to the harbour to watch & cheer as the Falklands Task Force left Portsmouth. The star of the show was without doubt HMS “Hermes”, with HMS “Invincible” also recieving a fantastic sending-off. I suppose that’s logical, since they carried more servicemen than the rest, which included HMS “Intrepid”, HMS “Coventry”, and HMS “Glasgow”. Anyway, we all know what happened, so I’ll let these photos speak for themselves; a couple were taken before this date. Credits to original photographers.