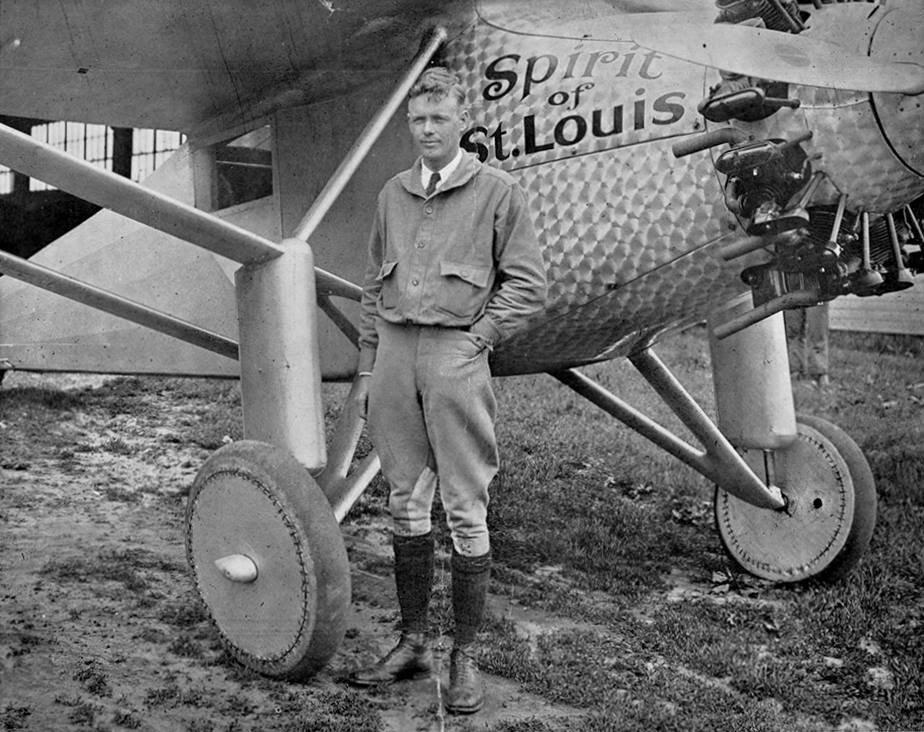 Today in Gosport’s Past:- on 31 May 1927, Charles Lindbergh flew into RAF Gosport (Grange Airfield) in his one-man aircraft “Spirit of St Louis”.

He arrived here after flying “Spirit of St Louis” non-stop from Roosevelt Airfield, Garden City (Long Island), New York, to Paris on 20/21 May 1927 (the first successful solo flight across the Atlantic). The flight, which covered some 3,600 miles, took 33 hours 30 minutes.

Upon landing at Le Bourget airfield, in Paris, sightseers thronged the aircraft, and some damage was done by enthusiastic souvenir hunters. After the damage had been repaired, Lindbergh then flew the plane to Belgium, from there to Croydon, and the following day on to Grange Airfield.

It was dismantled at Grange by the RAF, and taken by road to Southampton docks, where it was loaded onto USS Memphis (cruiser CL-13) for transportation back to Washington, where it was reassembled.

The aircraft was designed by Donald A Hall, and built by Ryan Airlines; the first flight was on 28 April 1927, being ‘retired’ exactly one year and 2 days later, on 30 April 1928. Until this momentous flight, Lindbergh had earned his living as a U.S. Air Mail pilot.

The monoplane, which earned Lindbergh the $25,000 Orteig Prize, is on permanent display at the Smithsonian’s National Air and Space Museum in Washington D.C. as part of the Milestones of Flight Gallery.

Charles Augustus Lindbergh was born on 4 February 1907, and died on 26 August 1974. The photos show Lindbergh and “Spirit of St Louis” after arrival at Gosport on 31 May 1927, and in a hangar at Grange airfield before being dismantled.

ALSO Today in Gosport‘s Past:-on 31 May 1916, the Battle of Jutland took place. many local folk would have lost someone during the battle, in which Britain lost 6,784 men against Germany’s 3,039 losses. We lost 14 warships to the Germans’ 11.

Much has appeared on TV covering the battle over the last couple of weeks, so my tribute to the occasion is limited to those photographs of those Royal Navy ships I could find. We lost 7 destroyers, of which I could only find photos of 4; the 3 destroyers I’ve missed deserve a mention: HMS Sparrowhawk, HMS Nomad, and HMS Nestor. Credits to original photographers.