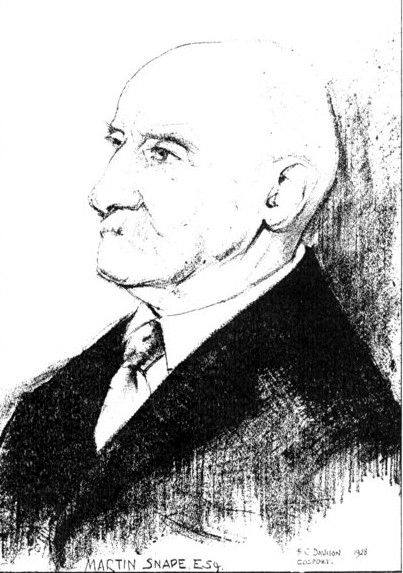 Today in Gosport’s Past:-  on 31 December 1852, renowned marine artist Martin Snape was born at Spring Garden Cottage (between what used to be The Railway Inn and what is now the Spring Garden Guest House), in Spring Garden Lane, Gosport.

His father was already an accredited artist in his own right, and reasonably wealthy, insisting that Martin and his four brothers attended Burney’s Naval Academy in Clarence Square, at a cost of 52 guineas per year each.

None joined the navy. After Martin Snipe had discovered his gift, it was widely appreciated, and he had paintings exhibited at the Royal Academy between 1874 and 1901. Most of his paintings (watercolour and oils) and sketches are of local scenes, some are elsewhere in Hampshire, such as the Meon Valley.

In 1922, he was commissioned to design Gosport’s town emblem, and he’d previously designed the frieze depicting (amongst others) Henry Cort which adorns the top half of the front of the Museum (the old library). He died aged 77 on 24 November 1930, and was buried in the cemetery of the Church of the Virgin Mary, Rowner Lane.
Here are some of his paintings, and a couple of odd relevant photos

Also Today in Gosport’s Past:-  on 31 December 1930, the last passenger train ran from Lee-on-the-Solent to Fort Brockhurst, conveying ‘six men and a dog’.

The line had been officially opened on 12 May 1894, a bay platform was used at Fort Brockhurst station, close to Fort Rowner’s Garrison Church, and there were intermediate stations (halts) at Privett (later renamed Gomer Halt, and Browndown. A third halt was opened at Elmore on 11 April 1910. Until the line was taken over by the London & South Western Railway, services were oprated by contractors, using Manning Wardle 0-6-0ST “Lady Portsmouth” and 2-4-0T No.21 “Scott” and a motley collection of rolling stock.

After the LSWR takeover things were a little more organised, although most locomotives used appear to have been of LBSCR origin. Profits, however, were not to be found, and the three intermediate halts at Gomer, Browndown, and Elmore closed on 1 May 1930 as a cost-cutting measure. Goods services on the line continued until 30 September 1935. Around 1965, the trackbed between the south end of Military Road and Browndown formed the route of the new road between Privett Road and Lee.

The station terminus building at Lee-on-Solent is an amusement arcade these days, and has been so for well over 50 years…

And ALSO Today in Gosport’s Past:-  on 31 December 1929, the last electric tram ran between Brockhurst and Gosport Ferry.

By this date, this was the only part of the tramway still in use, the Bury Cross route ended earlier in the year, and the Fareham route had been superceded by motor buses.

The electric tramway (4ft 7.75in gauge) had replaced the 3ft gauge horse trams completely as of 24 January 1906, the routes being Gosport Hard (later Ferry) to Fareham Railway Station via Hight Street, Clarence Road and Forton & Brockhurst Roads, and Gosport to Bury Cross/The Avenue (The Wiltshire Lamb), via Stoke Road and Foster Road – the good folk of Bury Road had objected strongly about trams in their road, so the Foster Road diversion was created, and it’s more or less been that way ever since, with buses.

The tram depot at Hoeford was built in 1902, primarily as a power station with a tram depot attached. The depot is still there…