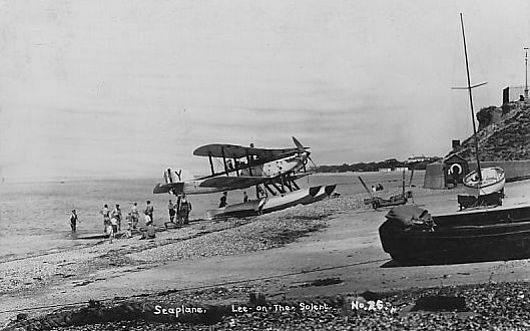 Today in Gosport’s Past:- on 30 July 1917, the Naval Seaplane Training School was opened at Lee-on-Solent, initially intended as a temporary sub-station of Calshot Naval Air Station, itself opened on 29 March 1913 by the Royal Flying Corps. The facilities at Lee-on-Solent consisted of a slipway and hangars, and was made permanent in 1918, and later, after a succession of name-changes, became the RAF Seaplane Training School in April 1924. The original site was around the area which now houses the Hovercraft Museum. On 25 October 1934 a new airfield adjacent to the site opened, all would become HMS Daedalus on 24 May 1939, when the RAF handed over control to the Admiralty. The airfield had a grass surface until late 1942, when tarmac was laid on the runway areas. Despite seaplane operations being officially discontinued when the airfield opened, seaplanes continued to use the Naval Air Station for many years. HMS Daedalus saw the development of the prototype SR-N1 hovercraft, and the maiden flight was from Daedalus slipway on 11 June 1959. The air station was renamed HMS Ariel on 31 October 1959 to reflect advances in electronics & radar, but was renamed Daedalus on 5 October 1965. HMS Daedalus was closed on 29 March 1996, after a working life of 79 years, but is still currently used by some civil aircraft & gliders, and now houses the Hovercraft Museum. Credits to original photographers.

ALSO Today in Gosport’s Past:- England won the World Cup. I (Dave Rowlands) was working as a bar boy on the Isle of Wight ferry during my school holidays that afternoon, and we were listening to the game on a transistor radio behind the bar. I was keeping the passengers up to date with the latest news while I was out collecting cups.