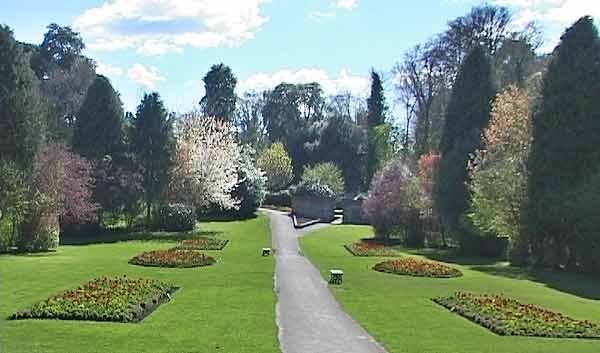 Today in Gosport’s Past:- on 29 March 1947, Stanley Park was officially opened to the public. Here’s a brief history.
A brickworks was opened in what is now Stanley Park in 1788 (eastern section of brickworks), and a western section of the brickworks was opened in 1806; both were connected to piers at Stokes Bay, one of which was connected to the brickworks via the bridge to the Alverbank which still survives in use today. The large dip in the park between The Alverbank and Western Way is the result of clay excavations.

The construction of Bay House began in 1838 and completed in 1842, and initially owned by Lord Ashburton. Alverbank House (now The Alverbank Hotel) was built in 1840 for the Rt. Hon. John Wilson Croker (1780-1857). Queen Victoria is known to have stayed at Alverbank House around 10 December 1857 when her son Prince Alfred (later Duke of Edinburgh; 24.5.1866-30.7.1900) was living there from October 1857 to September 1858; in recognition of the Prince’s associations with Gosport, a pub in Clayhall Road was named HRH Prince Alfred, which still stands as a private residence. Alverbank House was also visited by prime minister Robert Peel and Sir Arthur Wellesley, the Duke of Wellington.

In 1917/18, the house was lived in by Robert Raymond Smith-Barry (inventor of The Gosport Tube) and his wife; he was the commander of 1 Squadron (Reserve) at Grange Airfield, and initiated The School of Special Flying, designed to train pilots how to train other pilots, a revolutionary method adopted by air forces all over the world for many years. He used Alverbank House as an Officers’ Mess for Grange Airfield, and it was at the house that he developed the Gosport Tube. A blue plaque was put up at the front of the house just a few years ago to mark the event.

Between the wars and during/after World War 2, Bay House and much of its grounds were taken over by the military until 1944, when Gosport Borough Council purchased Bay House and 28 acres of its grounds for £15,000. The grounds were named Stanley Park in 1946, and the park was officially opened to the public on 29 March 1947. Until 1947, Stokes Bay had been off-limits to the public since early in WW2, so this coincided very nicely with the park’s opening.

Bay House was used by pupils of Gosport County School as from September 1949, and it was officially opened as the County Grammar School in September 1958. The older part of Bay House was badly damaged by fire in 1985, fully repaired by 1987.

On 2 August 1992 folk-rock band Fairport Convention played free in the garden of The Alverbank Hotel. An animal graveyard can be found near the main path from Gomer Lane; these are the graves of various pets belonging to the inhabitants of Bay House when it was in use as a private residence.