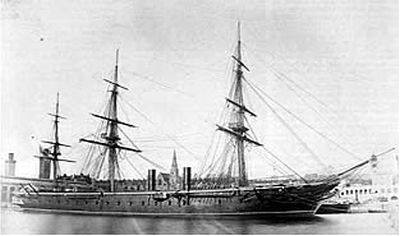 “Warrior” was the first of two sister ships (the other being HMS “Black Prince, launched on 27 February 1861 in Govan, Glasgow), being the first warships with an iron hull & steel armour plating.

She became obsolete by 1871, and was placed in reserve in 1875, and decommissioned in 1883. Two of her masts were found to be rotten at this time, and were removed, and weren’t replaced (none available); although reclassified a couple of times over the next few years, no further alterations were made until she was converted to a storage hulk in May 1901 until July 1902, during which time the engines etc were removed, enabling use as a destroyer depot ship from 1902 to 31 March 1904.

On this date she was transferred to Portsmouth to become part of the HMS Vernon Torpedo School, and named “Vernon III”, together with HMS “Donegal” (renamed “Vernon I”), HMS “Marlborough” (renamed “Vernon II”), and HMS “Actaeon” (the original “Vernon”, now renamed “Vernon IV”). New boilers & electric generators were installed to provide heating, lighting & hot water to the adjoining hulks, new fore & mizzen masts were refitted, and much of the upper deck was housed in and roofed to accomodate radio training.

In October 1923, HMS Vernon was transferred ashore to the gunwharf between Portsmouth Harbour station and the Camber docks. The hulks were dispensed with, but “Warrior” (renamed HMS “Warrior” on 1 October 1923), was declared redundant by the Royal Navy within six months, and being of iron & steel construction, was the victim of a glut of scrap metal after WW1 Her scrap value was negligible; there was no interest in buying the ship, which the RN had offered for sale on 2 April 1925, remaining in Portsmouth until 22 October 1927, when she was converted into a mooring jetty, losing the masts and all other equipment apart from boilers & generators, although two diesel-driven emergency pumps were installed.

Beneath the poop deck, accomodation for a shipkeeper & his family was provided, and the hulk was towed to Pembroke Dock on 13 March 1929. She served as a floating oil jetty there until after the closure of the oil depot at Llanion Cove. During WW2, her upper deck was given a thick concrete layer, and she was used as a base ship for coastal minesweepers, and was renamed “Oil Fuel Hulk C77” so as to release the name for an aircraft carrier – HMS “Warrior”.
In 1979, the Royal Navy donated the ship to The Maritime Trust, and in August 1979 was towed to Hartlepool coal dock, arriving on 2 September 1979. The ship’s restoration took a relatively short time, and she was towed out of Hartlepool on 12 June 1987, arriving in Portsmouth on 16 June.

I watched her arrival from Gosport Esplanade that day. She opened as a museum on 27 July 1987, and still provides Gosport with a great view.