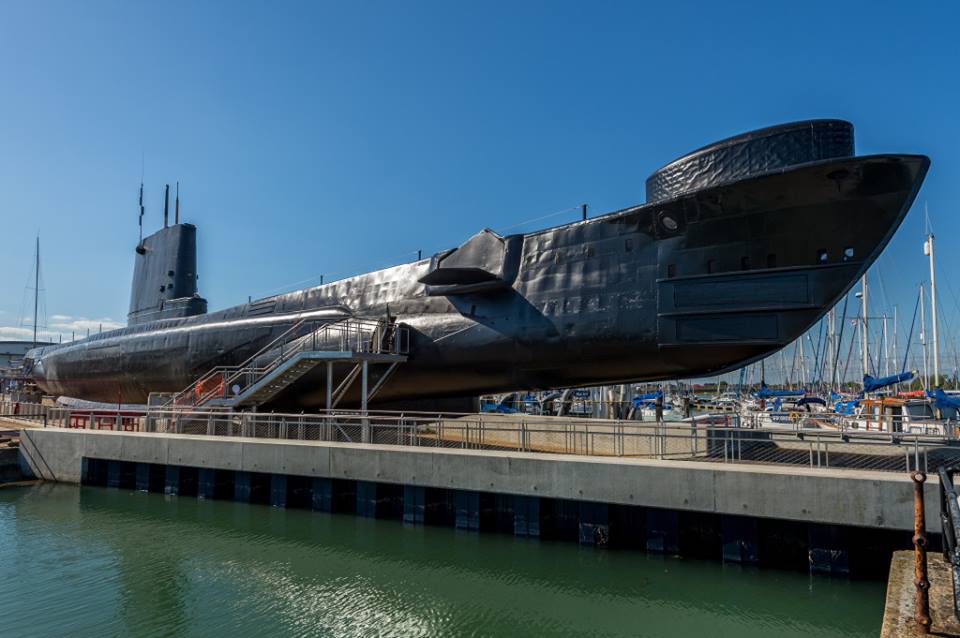 Today in Gosport’s Past:-  on 28 February 1978, HMS “Alliance” was transferred, on permanent loan to the Royal Navy Submarine Museum. The submarine was ordered in October 1943 as part of the emergency war programme; builders were Vickers Armstrong of Barrow-in-Furness, and she was laid down on 13 March 1945, launched at Barrow on 28 July 1945, and commissioned on 14 May 1947. Allocated pennant number P417, she was an ‘A’ Class submarine (aka ‘Acheron’ or ‘Amphion’ Class), arriving too late for war service.

She underwent extensive modernization between 1958 and 1960, with the deck gun being removed and the conning tower, hull, and fin were streamlined, giving a completely different appearance. In May 1961, all surviving submarines completed since the end of WW2 were renumbered from S01 upwards, “Alliance” became S67.

She was grounded at Bembridge Ledge on 12 January 1968, and rescued by tugs. A battery explosion at Portland occurred onboard on 30 September 1971, resulting in at least one fatality. From 1973 until 1979, she was the static training boat at HMS Dolphin, and was towed to Vosper’s Southampton yard in August 1979 for strengthening of the hull, to enable her to be exhibited out of the water at the Royal Navy Submarine Museum at Haslar.

A museum ship since 1981, “Alliance” is listed as part of the National Historic fleet. A number of corrosion problems (not least were those caused by c.100 pigeons living within the hull) costing £3.4 million to fix were, with the aid of a National Lottery grant, repaired between 2011 and March 2014. The Submarine Museum, which also houses Britain’s first submarine “Holland” is well worth a visit.

Here are some photos, starting with a very recent view of “Alliance” since being restored at Vosper’s, then some pics in chronological order, a couple of “Holland”, and a novelty vegetarian “Alliance”…

ALSO Today in Gosport’s Past:- on 28th February 1941, following an overnight German air raid, Gosport found itself without a police station; the station, in South Street was hit, and considered as ‘destroyed by enemy action’. Although I haven’t been able to discover any other casualties of this particular raid, Gosport was badly affected by air attacks during World War Two, particularly in 1940 & 1941.