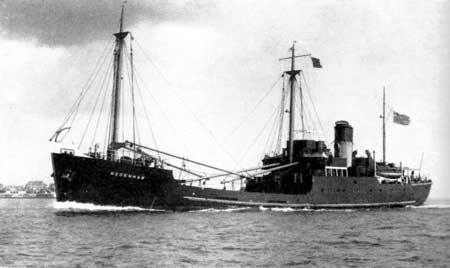 Today in Gosport’s Past:-  on 27 April 1951, Naval Armaments Vessel (NAV) “Bedenham”, having arrived at Gibraltar on 24 April from Devonport (Plymouth), exploded in Gibraltar harbour whilst unloading munitions, caused by a small fire on board the lighter alongside. Thirteen were killed, and many injured; the spot in the docks where the explosion occurred is now known as Bedenham Steps. Rather a coincidence that a munitions ship called “Bedenham” exploded, as on 14 July the previous year (1950), an explosion had destroyed Bedenham pier itself, along with eight barges. The ship was launched on 26 September 1938 in the Ailsa Shipbuilding yard at Troon, Scotland; she saw a lot of use during WW2, being sent to (among several British locations) Gibraltar, Scapa Flow, Malta, Oran (Algeria), and Haifa. NAV “Bedenham” berthed at Bedenham pier, Gosport, on 24 May 1950, remaining here until 15 June, when she departed for sea. This is the only recorded visit of the ship to Gosport, although she was involved with post-D-Day activities in the Solent around 10 June 1944. Credits to original photographers.