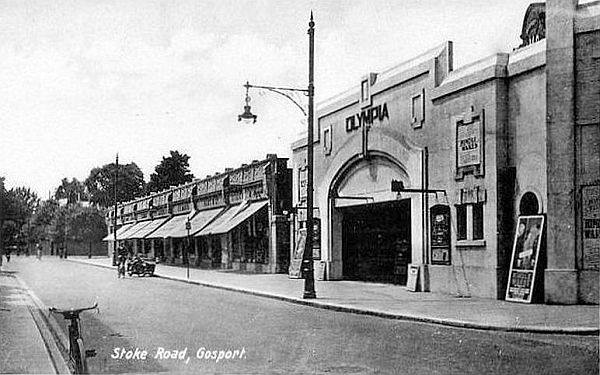 Today in Gosport’s Past:- on 26 March 1916, Gosport’s first cinema, The Picturedrome, in Avenue Road, burnt down.

The cinema had been opened in a former corrugated iron church (‘the tin tabernacle’), and besides, or possibly before becoming a cinema, the hall had been used for such enthralling events as ‘tripe evenings’ and ‘smoking evenings’. I shall leave the finer points of such occasions to your imagination.

After the destruction of the cinema, the owners purchased the roller skating rink on the corner of Stoke Road and Queens Road; after some negotiations regarding the regulations/bylaws concerning the use of the building, and rebuilding of the frontage & entrance, the building reopened some time in 1917 as The Olympia cinema.

Like the unfortunate cinema in Avenue Road, The Olympia also had a tin roof, apparently proving rather noisy when rainstorms occurred during film showings. The Olympia remained open until the mid-1930s, when The Ritz opened on 4th March 1935.
Credits to original photographers.