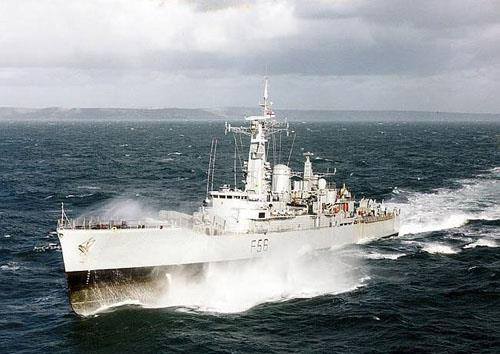 Today in Gosport’s Past:-  on 25 January 1995, ‘Leander’ class frigate F56 HMS “Argonaut” was towed from Portsmouth harbour to Spain for breaking up.

“Argonaut”, the fourth Royal Navy ship to carry the name, was launched on 8 February 1966 at the Hawthorn Leslie & Co shipyard on Tyneside, and was commissioned on 17 August 1967.

One of her duties during her first year in service was to accompany RMS “Queen Mary” to Long Beach, California, where the liner began a new future as a floating hotel. In 1971 “Argonaut” assisted in blockading Rhodesia, which Prime Minister Ian Smith had declared independent.

In 1973, the ship saw service as Guard Ship at Gibraltar, followed by a spell being involved in the Icelandic ‘Cod Wars’ on fishery protection duties for around nine months. She was modernised between 1976 and 1980, which allowed for ‘a potent anti-ship capability’. In 1981, she was on patrol in the Persian Gulf, and in 1982, “Argonaut”, together with HMS “Ardent” and RFAs “Regent” & “Plumleaf” headed off to Ascension Island (en route to the Falklands) on 19th April, 17 days later than the main task force, which had left Portsmouth on 2nd April.

They arrived at Ascension on 29th April, and departed for the Falklands on 6 May. During the action there, “Argonaut” recieved two hits by bombs from an Argentinian aircraft; the bombs failed to detonate, but two crewmen were killed when one of the bombs hit the ship’s magazine, which caused an explosion, which was to be expected. The offending bombs had to be defused, which was carried out successfully, unlike the similar situation on board HMS “Antelope”, in which the bomb exploded, and “Antelope” was lost.

After returning home to Devonport, repairs were carried out, and in 1987 “Argonaut” rescued Richard Branson and his balloon, in which he had failed to cross the Atlantic. Her last occasion of note was her appearance at the 75th Anniversary of the Gallipoli landings in 1990. The ship was decommissioned on 31 March 1993, and spent the next 22 months in Fareham Creek, before being towed off to scrap in Spain.

ALSO Today in Gosport’s Past:- on 25 January 1959, the first passenger train seen in Gosport since 6 June 1953 (the last passenger train from Gosport) visited the station in the form of a railtour; ‘The Portsmouth Direct Line Centenarian’ was organized to commemorate 100 years of the line from London to Portsmouth (via Guildford).

Gosport was the ultimate destination, but the tour, which started out at London Victoria (not Waterloo, which would have been more appropriate, being the terminus of the LSWR), travelled via Stewarts Lane Motive Power Depot, Pouparts Junction, Balham, Wimbledon, Clandon, Guildford, Godalming (old station – the original terminus before the line extended to Havant & Portsmouth), Guildford again, Havant, Fareham, and Gosport.

However, I digress. After arrival at Gosport, 30350 ran around its train, now facing the right way after running tender-first from Fareham. The route of the return trip differed slightly from the outward leg:- Fareham, Havant, Guildford, Chertsey, Staines Central, Richmond, Clapham Junction, and London Victoria. Arrival at London Victoria was 90 minutes late. Only a further 5 railtours managed to visit Gosport station after this date:- ‘The Solent Limited’ on 30th April 1961, with Adams ex-LSWR ‘O2’ class 0-4-4T 30200 plus Stroudley ex-LBSCR ‘E1’ class 0-6-0T 32694; ‘The Southdown Venturer’ on 20th February 1966, with Wainwright ex-SECR ‘N’ class 2-6-0 31411; ‘The New Forester’ on 19th March 1966, with Bulleid ex-SR ‘Q1’ class 0-6-0 33006; ‘The Solent Rail Tour’ on the following day, 20 March 1966, with Wainwright ex-SECR ‘U’ class 31639, and finally ‘The Hampshireman’ on 3 November 1968, with BR ‘Crompton’ (later designated Class 33) diesel D6533. The station itself was closed to all traffic with effect from Monday 6 January 1969, although the last train would have been the goods train to Fareham on Friday 3 January. Ho hum……
Credits to original photographers, and to John Debens & David Pearson for the tickets from their collections.