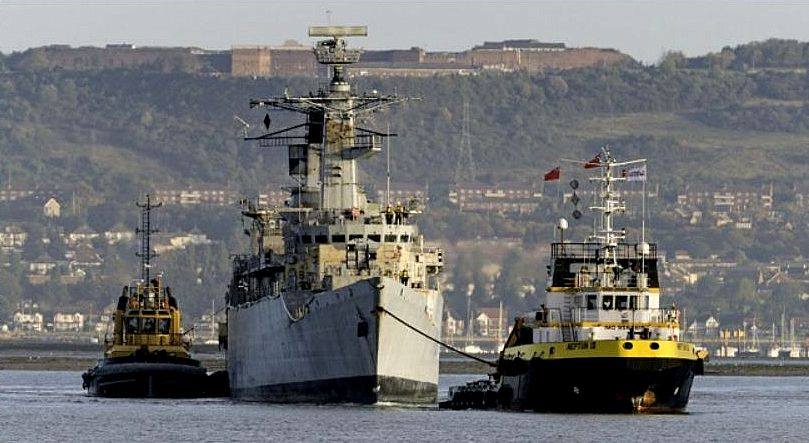 Today in Gosport’s Past:- on 24 October 2013, the Class 22 Frigate HMS “Cornwall” (F99) was towed out of Portsmouth Harbour to be scrapped in Swansea. “Cornwall” was the first of the 3rd batch of the class to be built, and the last to be decommissioned. She was laid down on 14th December 1983, and launched at Yarrow’s Clydeside shipyard at Scotstoun on 14th October 1985, being commissioned on 23rd April 1988 by Princess Diana, Duchess of Cornwall who, as the ship’s sponsor, had also launched the ship. In service, “Cornwall” found involvement with Somali pirates, some crew & marines being detained by the Navy of the Army of the Guardians of the Islamic Revolution in a dispute over restricted waters in the Gulf of Aden, among other smaller exploits. She was decommissioned at Devonport on 30th June 2011, and was later towed to Portsmouth Harbour, where she was laid up in Fareham creek along with sister ships “Cumberland”, “Campbeltown” and “Chatham”. The ship’s motto was ‘One and All’ and her nickname was ‘The Fighting 99’.
Credits to original photographers.