Today in Gosport’s Past:- on 22nd July 1982, another part of the Falklands Task Force returned; this time it was RFA “Tidespring”. The battered tanker was escorted into the harbour by Admiralty tugs with their customary waterjet display. The ship was cheered by crowds on both sides of the harbour, and moored at Gosport’s oil fuel jetty. I was fortunate enough to be working on the Isle of Wight ferry, and managed to take the accompanying photos.
Also on 22nd July, but this time in 1940, the Torpedo Training Section was opened at HMS ‘St Vincent’ (Forton Road barracks). 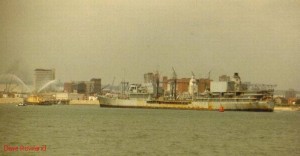