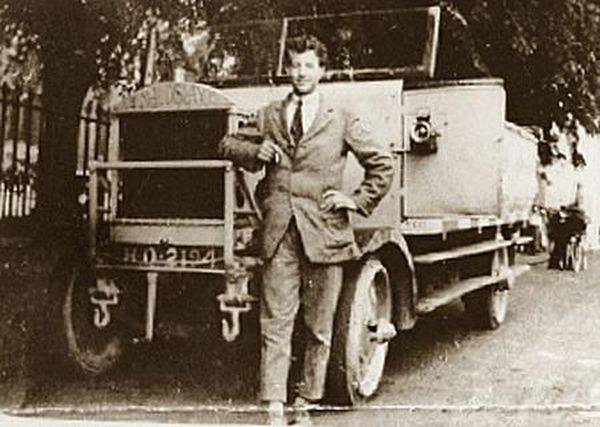 Vic was born in Gosport on 26 May 1887, and became one of the town’s most enterprising characters, dabbling in motorcycles, aircraft, building, and transport. One of his early efforts was his home-made monoplane; this was rather a Heath Robinson affair, equipped with a JAP motorcycle engine, and bicycle wheels and forks as undercarriage. I believe that the monoplane had been built elsewhere, and had been brought to Gosport by train (wings removed), and it’s worth mentioning that, despite other aircraft managing to fly before this, Vic’s plane is believed to have been the first to take off unassisted in Britain; previous successful flights having had the assistance of being towed, gravity, or being propelled into the air.
During 1909/10, Vic Hutfield teamed up with three other local gentlemen to form the ‘RAS Aeroplane Co, Gosport’, using their names as the initials (Reader, Allen & Sheffield), and Vic Hutfield tried out his monoplane at Grange. He also built the first aircraft hangar at the site in which to house his own aircraft; the roof of the early hangar was later used as a roof on his Brockhurst garage, which in later years became Reekies (on the south corner of Harding Road). The monoplane was ready for testing at Grange in July 1910. Several flights got off the ground but landings were rather unsuccessful, with Grange field being uneven, with potholes & puddles, and damage included breaking the propellor. After awaiting a new propellor for months, when it arrived it had been badly made, and couldn’t be used. When finally a new propellor had been fitted, after much fiddling about, a young lad offered to fly the plane, and it flew for several hundred yards, probably because of the light weight of the lad, who later became Air Vice Marshall Lywood. Later in 1910, Vic decided not to do any more trials at Grange, and instead, put it on display in his garage at Brockhurst, and it was something of a success. He put it up for auction on 5th November 1910, asking ‘£600 or nearest offer’. The asking price included ‘large new hangar, benches, vices, tools, with complete camp outfit for four persons’, and ‘free use of excellent flying ground with no extra expense’. The monoplane was know to be still in existence in 1964…… somewhere.
Vic had a workshop in Brockhurst Road (on the corner of Harding Road) where he built motorcycles, among other things, and he made (and sold) the Hutfield JAP motorcycle engine there. He later opened a much larger workshop just along the road, more or less where the brick yard is now. In 1925 he converted an ex-army lorry into the driving part of an articulated vehicle, producing an articulated tanker which may possibly have been the first articulated goods vehicle. In 1939, Vic purchased the old military prison in Lees Lane; he’d built a pulverizing machine, into this he fed the bricks & rubble from the prison, and made new bricks from the results. With these bricks, he built his own bungalow on the site, naming it ‘Chilworth’; with the many bricks left over, he built the houses in Chilworth Grove for rent. The archway of the prison remained in place for some years afterwards, and Chilworth Grove’s houses have since all been replaced. His other noteable achievement was his bus & coach services; he owned around three such concerns throughout England, which over the years used about 800 buses & coaches. His Gosport bus garage was in Forton Road, close to where Lidl’s is now, and he ran the bus services (later just for contract & private hire) with his nephew Cyril; the garage was built in an Art Deco style, and was sadly demolished in the late 70s, as far as I’m aware. Here’s a bunch of relevant photos; credits to original photographers.