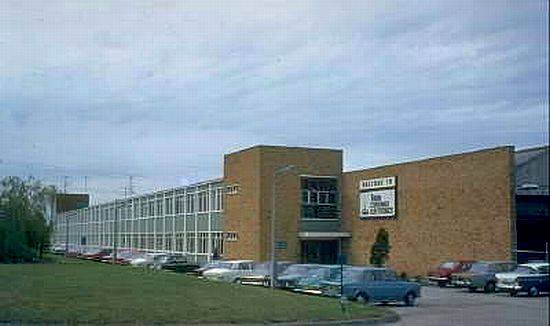 Today in Gosport’s Past:-  on 20 February 1992, The Ultra/Ferguson TV factory closed, with the loss of over two thousand jobs.

The Ultra TV factory, at Fareham Road, adjacent to Hoeford lake, was built in 1955, and became Gosport’s largest employer of civilians. Most people who’ve lived in Gosport for any length of time will either have worked there themselves, or will have friends and/or family who’ve worked there; I worked there for 6 months in 1970. At that time it was owned by Thorne Electronics (Sir Jules Thorne, I think); the company’s list of industrial premises covered two pages of newsprint.

In 1987, the factory was sold to Thompson, a French company. It would appear, in retrospect, that Thompson’s acquired the factory in order to get rid of it, thus cutting expenses while reducing competition which might interfere with their own products. And so it was, within five years, on 20 February 1992, that Gosport’s largest workforce found themselves on the dole….

ALSO Today in Gosport’s Past:- on Saturday 20 February 1966, ‘The Southdown Venturer’ railtour visited Gosport station; the tour was organized by The Southern Counties Touring Society, and started out at London Victoria.

The first part of the trip was hauled by ex-SR Bulleid ‘West Country’ class 4-6-2 34013 “Okehampton”; the route was via Battersea Park, Clapham Junction, East Croydon, Sanderstead, Oxted, Edenbridge Town, Eridge, Uckfield, Lewes, and Brighton. Following this, the Brighton to Preston Park section was hauled by ‘Crompton’ (class 33) diesel D6543, where 34013 took over again for the coast route via Worthing and Chichester to Fareham, where 31411 took over, hauling the train tender-first to Gosport. 31411 returned the train to Fareham, then to POrtsmouth Harbour (tender-first again). 34013 then took over for the return to Victoria via Haslemere, Guildford, Effingham Junction, Leatherhead, Epsom, Sutton, West Croydon, Norwood Junction, and Forest Hill, terminating at London Bridge.
There were three more railtours to get to Gosport station, on 19 March 1966 with ‘Q1’ class 0-6-0 33006, two days later, on 21st March, with ‘U’ class 2-6-0 31639, and 3rd November 1968, with ‘Crompton’ diesel D6533. Here are photos from 20 February; credits to the other original photographers (two are mine).