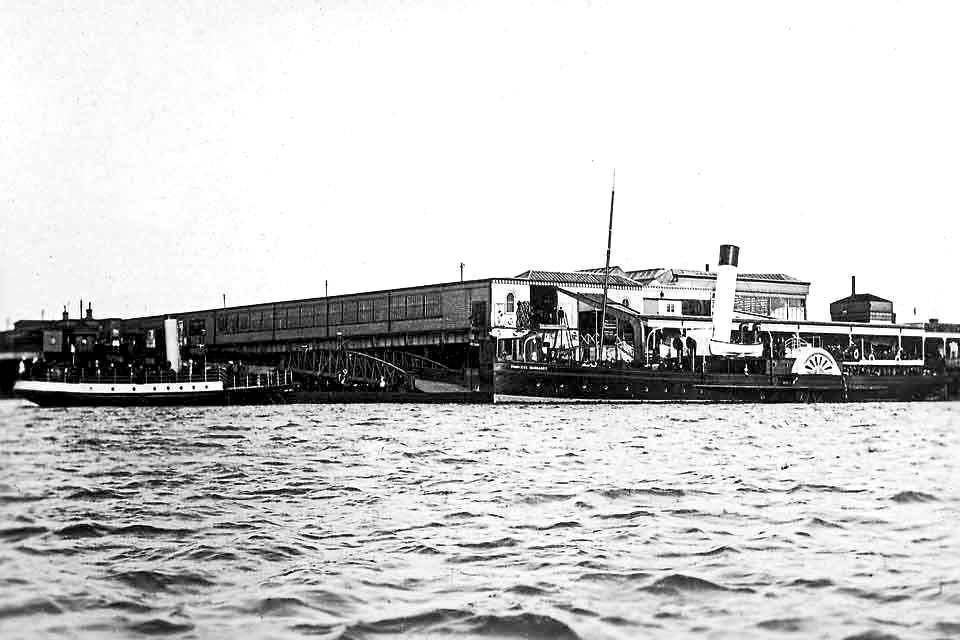 Today in Gosport’s Past:- on 2 October 1876, Portsmouth Harbour railway station was officially opened. “But that’s not Gosport!” I hear you cry; well, it’s particularly relevant because this was effectively the first nail in the coffin of Gosport’s railway.

Previous to this date, the only direct rail/ferry connection to the Isle of Wight was via Stokes Bay Pier; the station in Portsmouth was in town (Portsmouth & Southsea, then a terminus), and passengers for the Isle of Wight had to make their own way from there to Clarence Pier, where all island services arrived & departed. Carting luggage onto hansom cabs, then unloading again at Clarence Pier, and onto a ferry would have been a bit of a trial.

The train journey from London to Portsmouth was a far shorter journey than the Gosport route (via Basinstoke and Bishopstoke (now Eastleigh). You don’t need to join up many dots to see what was going to happen here.

The Stokes Bay route, complete with ferries, DID carry on, but with a greatly reduced clientel; the ferry service was suspended at the outbreak of WW1, and the demand for trains to a pier on an isolated beach became negligable, and the last train to/from the pier ran on 31 October 1915.

Portsmouth Harbour station is nowadays the nearest thing Gosport has to a railway – quite literally.
An interesting fact regarding Portsmouth Harbour station:- the track across the viaduct to South Railway Jetty veered off the main line soon after the road bridge, running along the Gosport side of the signalbox at the end of the station, which is why, even when a new signalbox was built, it was set back closer to the road. The angle of the signalbox would appear to be confusing now, but was set back to allow for the track to pass in front of it.

The viaduct was built when Portsmouth Harbour station had been completed (1876), and was equipped with a swing bridge section close to South Railway Jetty.

The Military had allowed the breaching of Hilsea Lines to enable the railway to enter Portsmouth, and it was on the condition that this line to the dockyard was constructed; before the coming of the railway, South Railway Jetty had been known as ‘the watering island’.

The dockyard had a comprehensive railway system; it’s said that every dock and basin was served by a railway line. The South Railway Jetty had a large and ornate building for crowds to meet & greet dignitaries, royalty and the like.

That building is still in use elsewhere in the dockyard. The viaduct was, in effect, the posh front door of the dockyard; the ‘tradesmens’ entrance’ was a spur from the high level platform at Portsmouth & Southsea station, just east of the train shed, starting at a point halfway along the platform; there was also a signalbox there. This line ran down an incline, and crossed Edinburgh Road via the level crossing.

The South Railway Jetty was last used by trains in 1939, and the last Royal train was on 6 May 1939, when King George V and Queen Elizabeth (The Queen Mother-to-be) left for a visit to the USA and Canada aboard SS “Empress of Australia”.

The swing bridge section was removed and scrapped on 19 December 1946, and the rest of the viaduct stood until demolished between 1960 and 1962. Credits to original photographers.