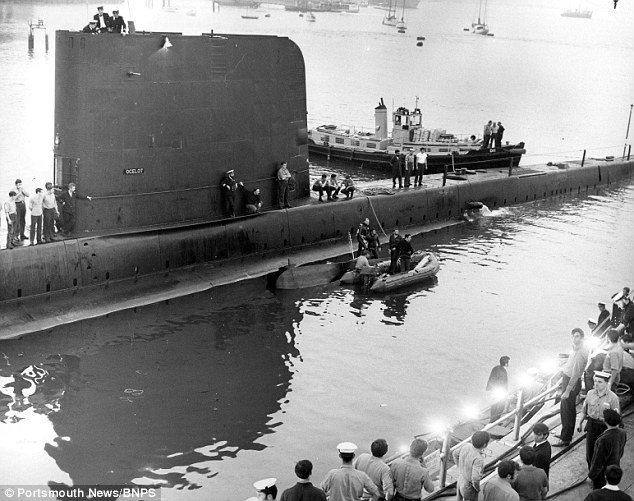 Today in Gosport’s Past:- on 2nd July 1971, three submariners were rescued from HM Submarine “Artemis” after she sank alongside at HMS Dolphin on 1st July. This report from the BBC website explains:
“At the time of the sinking in 1971, HMS Artemis was in Gosport for maintenance and was being made ready to leave again. She had been brought out of dock but most of the senior officers were not aboard and she was under the command of the sonar operator. When she was alongside and taking in fuel they had run cables through the hatches into the engine-room to power her systems, and as she was ballasted down to take the fuel for her diesel engines, water came in through the hatchways which because of the cables were not closed. Very quickly the vessel began to sink. The Duty Petty Officer David Guest went below to shut down whatever parts of the ship he could. There was a group of Sea Cadets aboard and Guest quickly cleared them out and went on making sure there was no one else there. He found two engine-room mechanics aboard but because of the water coming all three were unable to get out and they shut themselves into the forward compartment in the torpedo stowage area. The ship sank to the bottom of Haslar Creek. The three men were trapped on board the sunken submarine for 13 hours but eventually managed to escape in immersion suits through the forward escape tower.
The whole episode was a shambles and bad for the Submarine Service’s reputation. There was a court of inquiry and blame laid where it was deserved but a report, ‘HMS Artemis – The Lessons Learnt’, was produced and is still required reading for submarine commanders. Artemis was eventually raised by salvage vessels but the salt water had done its damage and in view of her age she was sold for scrap in 1972.”

John Pounds scrapped “Artemis” at Tipnor in 1972. HMS “Artemis” was an ‘A’ class submarine, launched on 26th August 1946, arriving too late to be involved in WW2. Credits to original photographers.