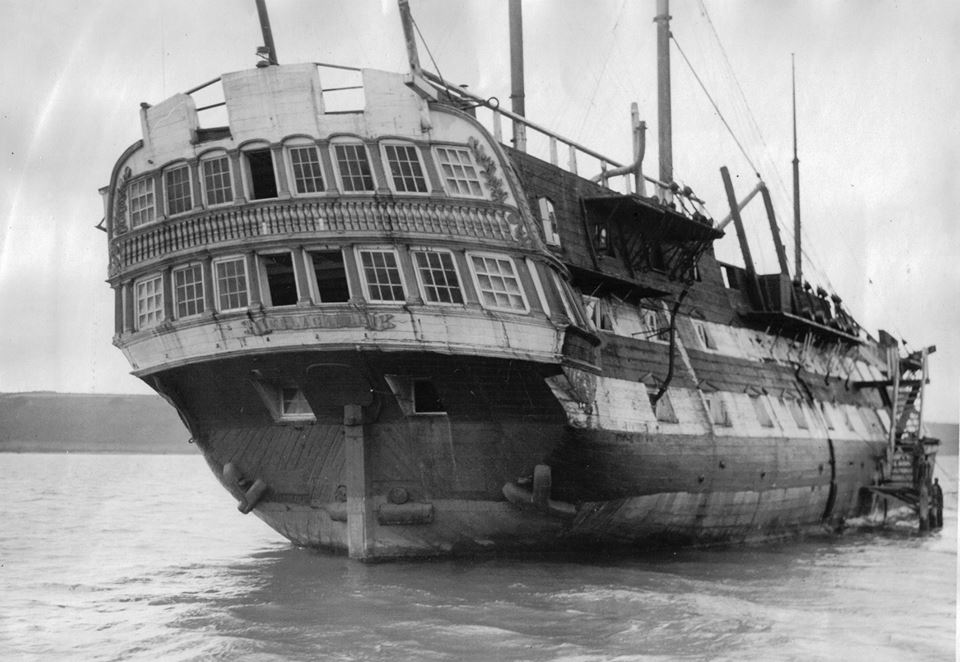 Today in Gosport’s Past:- on 2 December 1949, HMS “Implacable”, the Royal Navy’s oldest ship still afloat, was taken to a position approximately 5 miles off Ventnor, and sunk by explosive charges.

HMS “Implacable” was originally the French ‘Temeraire’ class ship “Duguay-Trouin”, launched in 1800, and was one of only four French ships to survive the battle of Trafalgar on 21 October 1805, but was captured by the British just two weeks later at the Battle of Ortega on 3 November.

She was put into RN service as HMS “Implacable”, serving in the Royal Navy until unfit for service in 1842, when she was put into dock in Devonport, recieving intermittent restoration work over the years, and used near Plymouth as a training ship afloat by 1855.

After being moved to Gosport around 1932, she joined TS “Foudroyant” off Hardway, with both serving as training ships. In 1943 “Foudroyant” and “Implacable” were together commissioned as HMS “Foudroyant”, and used as stores ships for the duration of the war. She survived WW2, and despite great efforts to preserve the ship since as early as 1908 (HM King Edward VII was keen to preserve the ship), it was decided in the austerity years that Britain couldn’t afford the cost, estimated at the time to be £200,000;

“Implacable” had been offered to France for preservation in 1947, but similarly, they couldn’t afford it either, sadly. As a result, only the stern gallery, a capstan, and the figurehead were later salvaged from the wreck. The ship flew the White Ensign alongside the French Tricouleur as she sank, and a Royal Navy and a French warship were in attendance at ‘the funeral’. There was a great public outcry at the sinking of a ship which was the second oldest in the RN (“Victory” being the oldest, but in dry dock); a direct result of the failure to save HMS “Implacable” was the decision to preserve the tea clipper “Cutty Sark”. A very sad end for a ship with such a vivid history.
Credits to original photographers.

ALSO Today in Gosport’s Past:-  on 2 December 2009, Haslar Hospital was sold to developers, apparently for the miserable sum of £1 million.

The intention was for it to become ‘a veterans’ village’. Yes, of course it was. Pity no-one gave a thought about what Gosport ACTUALLY needs – A HOSPITAL….
Credits to original photographers.