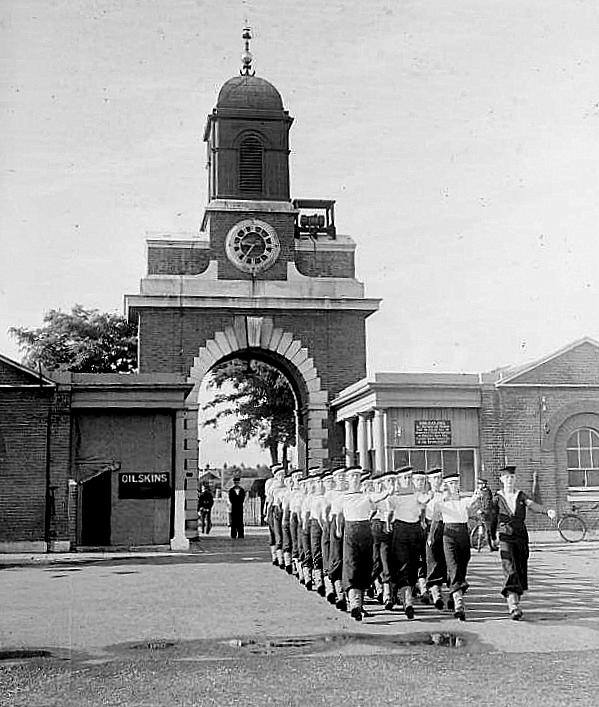 Today in Gosport’s Past:- on 2nd April 1969, the white ensign was lowered for the very last time at HMS St Vincent barracks; the site was sold to land agents the very next day. In fact, the barracks was officially closed on Sunday 12th December 1968, and a service was held there on that date; there’s a photo of the programme of that service included here. Thanks to Fiona Etheridge for the photo; her father, Kenneth Etheridge B.E.M, was Master at Arms at St Vincent, and is seen dressed peculiarly in the centre of the pic at the top. They made a day of it….
Here’s a brief history of the barracks:- Forton barracks was built in 1807, being used by a series of various servicemen having business in Gosport, but was handed over to the Portsmouth division of the Royal Marines Light Infantry in 1848, an arrangement which lasted until 1923, when an amalgamation with the Royal Marine Artillery occurred. In 1893 a 400-seater theatre was added within the barracks. A fenced swimming pool was constructed to the north of the barracks, partly-built on a convicts’ graveyard by Forton Lake; the pool was demolished & filled in some years back. By 1923, the barracks needed a lot of repair work doing, estimated cost £60,000, so the Marines moved to Eastney barracks on 1st August 1923. Following the essential repairs, Forton barracks reopened in 1927 as a training school for boy seamen, and named HMS St Vincent, being commissioned on 1st June 1927. At the beginning of WW2, it became a training centre for officers of the Fleet Air Arm (the boys having been evacuated to HMS ‘George’, on the Isle of Man, in 1939), and a torpedo training section was opened on 22nd July 1940. On 1st December 1945, it reverted to training boy seamen, remaining as such until the establishment was, following the closing ceremony on 8th December 1968, officially closed on Sunday 12th December 1968, and a service was held there on that date, although the white ensign wasn’t lowered for the last time until 2nd April 1969, and sold to developers the following day. With many of the historic buildings having been demolished in the ensuing years, St Vincent Secondary School opened on the site in 1975, and St Vincent Sixth Form College opened in 1987, sharing the facilities with the secondary school until the year 11 pupils had left in 1990, at which time it became solely St Vincent College, and, as such, remains today.
Long before Forton Barracks became HMS St Vincent, the name had seen some use in the Royal Navy: the first “St Vincent” was an 8-gun fireship captured from the French in 1692, and sold in 1698; the second “St Vincent” was a Spanish 15-gun sloop, the “San Vicente”, captured in 1780 and sold in 1783. The third HMS “St Vincent” was a 120-gun first rate ship of the line, launched at Devonport on 11th March 1815; one of three ‘Nelson’ Class ships, and the only one of them to see active service. Not commissioned until 1829, a fairly undistinguished career followed, and from 1862 was used a training ship at Portsmouth. In 1870 the training ship, which had just 26 guns remaining, was moved to Haslar (near where the Gosport Marina lightship ‘Mary Mouse 2’ is now), and remained moored there on a permanent basis until 1905, used for training boy seamen. She was sold for scrap in 1906, and finally scrapped in Sheerness. The fourth, and last floating HMS “St Vincent” was built in Portsmouth dockyard, being launched on 10th September 1908, and completed in May 1909. She was one of the original ‘Dreadnought’ type battleships, seeing some action in WW1, after which she was used as a gunnery training ship at Portsmouth from March 1919 until June 1919, then sent to Rosyth, remaining there until sold for scrap on 1st December 1921, and scrapped at Dover in March 1922.
Credits to original photographers.