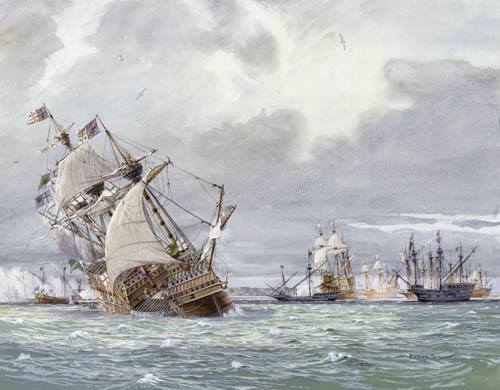 Today in Gosport’s Past:- on 19th July 1545. the “Mary Rose” sank off Southsea. The ship remained undiscovered until 10th June 1836, when one Henry Abinett stumbled across the wreck whilst diving to clear snagged fishing nets. After a prolongued period of nothing whatsoever happening, the wreck was rediscovered on 5th May 1971 by a diving team actually LOOKING for the wreck. After 11 years of diving & recovery of a variety of artefacts, “Mary Rose” was finally raised to the surface on 11th October 1982. The rest is, quite literally, history. Although this is considered ‘a great ship’, the overall length is estimated as approximately 40 metres (about 132 feet); to give some idea of comparison, the Isle of Wight ferry MV “Southsea” had a length of 198 feet – some 66 feet longer than “Mary Rose”. It’s a funny old world innit. Credits to original photographer/artist.