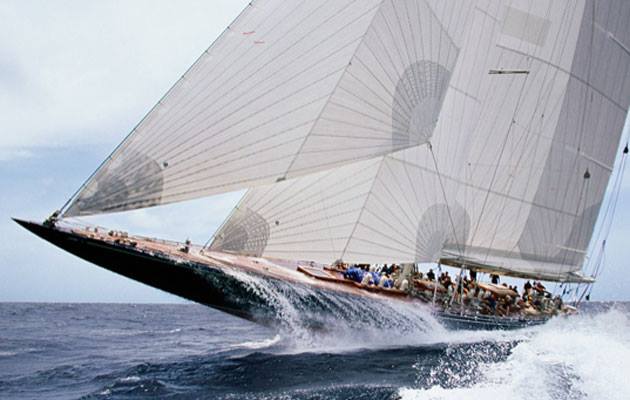 Today in Gosport’s Past:- on 19 April 1934, Sir Tommy Sopwith’s ‘J’ class yacht “Endeavour” was launched at Camper & Nicholson’s shipyard in Gosport; she was designed by Charles Nicholson for competing in the Americas Cup. A successful yacht, although not winning the cup, she was laid up in 1937, and over a period of time she fell into a state of disrepair, actually being sold for scrap in 1947. “Endeavour” was rescued at the 11th hour, but nevertheless the state of things didn’t improve, and she actually sank on the River Medina (Isle of Wight), during the mid-seventies. Once again she was rescued, this time by a pair of carpenters who bought the yacht for £10, who managed to get her afloat by plugging the holes in her hull with plastic bags. Once again, despite being rescued, nothing appears to have been done by way of repairs and/or restoration, and by 1984 “Endeavour” was to be found, mastless & rudderless, and in a terrible state, onshore at Calshot. Yet again, fate stepped in, and Elizabeth Meyer purchased “Endeavour”, which then underwent a 5-year restoration project at Calshot. The yacht was fully restored and fitted out, and on 22 June 1989, “Endeavour” sailed again for the first time in 52 years. In 2010, she recieved an 18-month refit in Auckland, New Zealand, being relaunched on 8 October 2011, and in February 2016, “Endeavour” was on sale – asking price 17,500,000 euros; any takers? Credits to original photographers.

ALSO today in Gosport’s Past:- on 19 April 1904, the funerals of the 11 crew members of HM Submarine “A.1” took place at Haslar Naval Cemetery in Clayhall Road; many hundreds lined the funeral route, civilians and servicemen alike, to pay their respects. HM Submarine “A.1” had suffered a collision with the mail steamer SS “Berwick Castle” near the Nab Tower a month earlier, on 18th March 1904. “A.1” had been on excercise, and been conducting an ‘attack’ on HMS “Juno” when the steamer, en route from Southampton to Hamburg, hit the starboard side of the conning tower of “A.1”. The submarine sank in 39 feet of water, but flooded quickly, resulting in the loss of the entire crew of 11. This was Britain’s first submarine to be lost with all hands, and a consequence of this was that all subsequent submarines were built with an airtight hatch at the base of the conning tower. “A.1” was the lead boat of its class, and was actually ordered as a Holland-type submarine, but specifications changed, and she became the first of the ‘A’ class, being launched on 9 July 1902. Fort Blockhouse became a submarine base in 1904, and it’s quite possible that “A.1” left from Gosport. Rather ironically, the submarine was raised from the sea bed on 18 April 1904 – the day before the mass funeral. “A.1” was soon recommisioned after repair work had been completed. In August 1910, the boat was converted for use as a testbed for the Admiralty’s Anti-Submarine Committee, but was lost a year later when operating submerged; no crew were lost, as she was operating unmanned under automatic pilot. Despite it being known where “A.1” had sunk, she could not be located, and it wasn’t until 1989 that a local fisherman discovered the wreck 5 miles off Bracklesham Bay. It was discovered that she’d never completely flooded, and the large distance between where she sank and where she was found were attributed to the degree of buoyancy owing to the air trapped within. The site was declared a Protected Wreck site on 26 November 1998, that area being widened on 5 October 2004. A memorial was erected in the Naval Cemetery dedicated to the memory of the crew, and can still be seen today. Credits to original photographers.