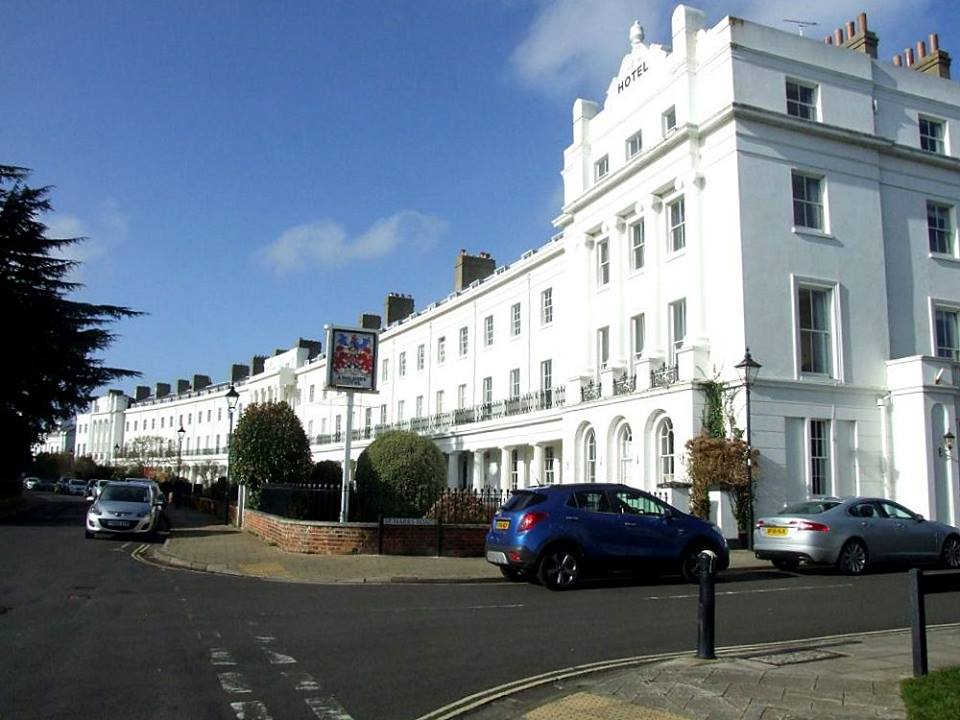 Today in Gosport’s Past:- on 18 March 1830, The Anglesey Hotel, in Crescent Road, was officially opened. Situated on the east end of The Crescent itself, the opening of the hotel took place about a year before the rest of the spectacular building was completed in 1831.
The building of The Crescent was Robert Cruickshank’s masterpiece, and had his dream of Angleseyville been completely fulfilled, it would have been even more impressive. The gardens opposite, containing the reading rooms and bath house were opened around this time.

Had Cruickshank’s ambitions been realised, there would have been a mirror-image Crescent from the end of St Mark’s Road (formerly North Terrace) stretching eastward towards Monckton, to be known as Fleming Terrace, but sadly this was never built.

A racecourse was also built nearby, and visitors who came to Gosport to watch the horseracing were able to stay in The Anglesey Hotel. The genius behind these, and a number of other innovative and successful schemes (including Haslar toll bridge, St Mark’s church, and the floating bridge) lived in The Crescent itself, and following his death on 13 February 1853 at the age of around 65, he was buried in St Mark’s churchyard cemetery, literally just around the corner from his home, in a churchyard which he himself had had built.

The church itself was demolished in 1911, but the graves remained, and the area formerly occupied by the church was utilised for consequent burials; the foundations of the old church can still be traced today.

Although the racecourse fell into disuse after Cruickshank’s death, and subsequently built upon, the bath house & reading rooms survived in use well into the 20th century, but eventually succumbed to disuse and abandonment, and although the gardens still remain, the bath house & reading rooms were demolished around 1951 (they’d been donated to Gosport Borough Council by Cruickshank’s daughter, along with the gardens).

The Anglesey Hotel continues to thrive even today, and the hotel bar in St Mark’s Road (originally North Terrace) is a popular haunt for locals. The Crescent has, for many years now, been bedecked in white, and is surely the most impressive building in Gosport, given the stiff competition from Gosport station, Clarence Yard, and of course Haslar Hospital.

ALSO Today in Gosport’s Past:- on 18 March 1904, HM Submarine “A1” suffered a collision with the mail steamer SS “Berwick Castle” near the Nab Tower. “A1” had been on excercise, and been conducting an ‘attack’ on HMS “Juno” when the steamer, en route from Southampton to Hamburg, hit the starboard side of the conning tower of “A1”.

The submarine sank in 39 feet of water, but flooded quickly, resulting in the loss of the entire crew of 11. This was Britain’s first submarine to be lost with all hands, and a consequence of this was that all subsequent submarines were built with an airtight hatch at the base of the conning tower.

“A1” was the lead boat of its class, and was actually ordered as a Holland-type submarine, but specifications changed, and she became the first of the ‘A’ class, being launched on 9 July 1902. Fort Blockhouse became a submarine base in 1904, and it’s quite possible that “A1” left from Gosport. The sub was raised on 18 April 1904, and soon recommisioned after repair work had been completed.

In August 1910, the boat was converted for use as a testbed for the Admiralty’s Anti-Submarine Committee, but was lost a year later when operating submerged; no crew were lost, as she was operating unmanned under automatic pilot. Despite it was known where she had sunk, she couldn’t be found, and it wasn’t until 1989 that a local fisherman discovered the wreck 5 miles off Bracklesham Bay. It was discovered that she’d never completely flooded, and the large distance between where she sank and where she was found were attributed to the degree of buoyancy owing to the air trapped within.

The site was declared a Protected Wreck site on 26th November 1998, that area being widened on 5 October 2004.
Back to the events of March 1904; the unfortunate crew of “A1” were all buried on the same occasion at Haslar Naval Cemetery, Clayhall.