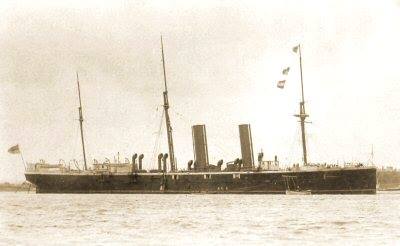 Today in Gosport’s Past:- on 17 April 1878, HMS “Mercury” was launched in Pembroke. She was one of two ‘Iris’ class cruisers, the other being HMS “Iris”; this pair were the very first all-steel ships in the Royal Navy. Built as a steam-powered barque with sails, the sails were soon dispensed with on both ships, and they became the RN’s first ‘mastless cruisers’. “Mercury” served with the Portsmouth reserve fleet from 1879 (being completed on 18th September of that year) until 1890, then served in China, returning to the Portsmouth Reserve in 1895, remaining in this role until 1903. From 1903 to 1905, the ship was used as a school for navigation officers, and from 1906, was moored at Haslar (where HMS “St Vincent” was moored from 1870 to 1905), and used as a submarine depot ship, remaining there until 1913, before moving to Harwich in a similar role. Previous to her arrival at Gosport, the very first submarine depot ship at Blockhouse had been HMS “Hazard”, launched as a torpedo gunboat on 14 February 1894, and converted to a depot ship at Barrow in 1901; she accompanied the last three of the 1st Submarine Flotilla (‘Holland’ class submarines) from Barrow to Blockhouse after their completion. After being replaced by HMS “Mercury” she became a mobile submarine depot ship, and was sunk in action on 28 January 1918. “Mercury” in turn was replaced by HMS “Pandora” (formerly the Russian depot ship “Seti”, purchased on 9th November 1914), which served until being sunk on 23 December 1939; she had been renamed HMS “Dolphin” in 1924. This should not be confused with the HMS “Dolphin” which was launched on 9 December 1882; she was also a submarine depot ship at Blockhouse in 1906/7, after which time she became the flagship of HMS Dolphin at Haslar from 1912 until being sold in 1924; THIS was the ship that the shore establishment was named after, and she had a further career as a training ship in Leith, Scotland, until the 1970s, being broken up on a beach in 1977. However, I digress.
After her short spell as a depot ship in Harwich, HMS “Mercury” was hulked in Rosyth in 1914, then sent to Chatham as an accomodation ship from 7 January 1918. She was paid off in March 1919, and sold for scrap on 9 July 1919. Credits to original photographers.