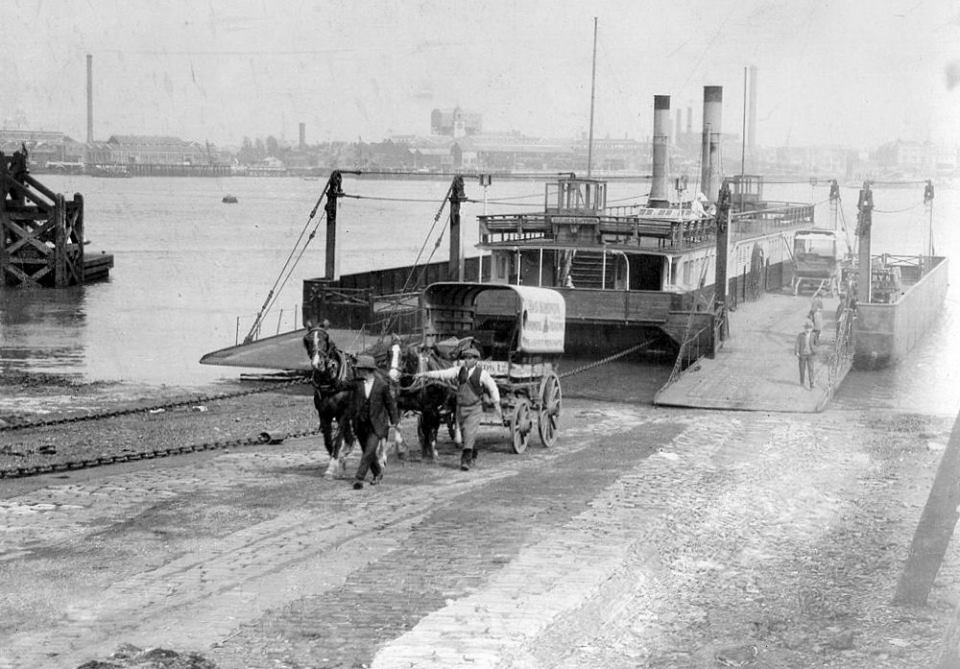 Today in Gosport’s Past:-  on 15 December 1959, the Floating Bridge services between Gosport and Old Portsmouth were suspended, and never ran again after this date.

The chain ferries themselves were in a very poor state, as were the company’s finances, which ruled out any repairs to the two vessels. Not only that, but over the years, a mud bank had formed near the slipway at Gosport, and at low water, there were occasions when the ferry couldn’t quite reach the slip.

Again, money would have been required to rectify the situation, and it was simply deemed not to be worth doing, certainly not given the company’s financial state.

So that was it; the two vessels, “Alexandra” and “Duchess of York” were cut up on the Gosport slipway during 1960; the first to be scrapped fetched around £1500 including the machinery & chains, the second was valueless. 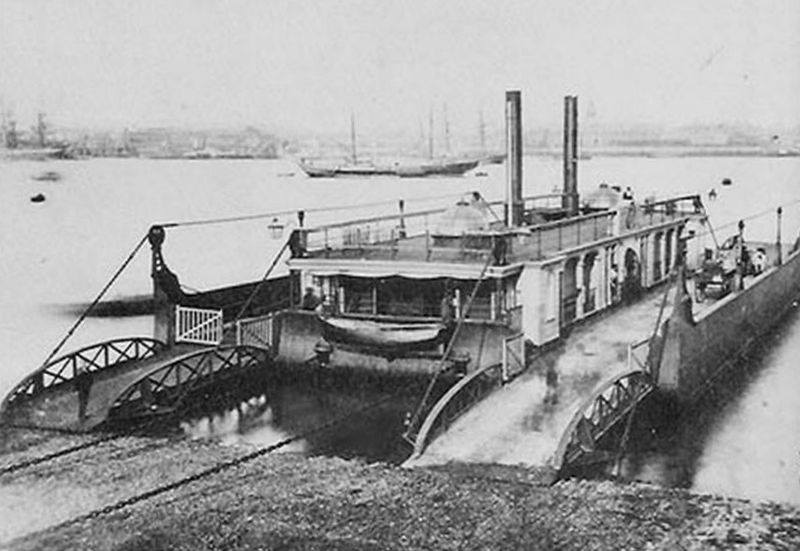 The floating bridge (aka chain ferry) was one of many bright ideas by Robert Cruickshank, also responsible for Haslar toll bridge, The Crescent, Anglesey Gardens, the bath house & library which could be found there, the associated pumphouse, St Marks Church, and Angleseyville Racecourse.

He set up a company in 1840 to facilitate travel from Portsmouth (initially as a means of encouraging vistors to his recently-built Crescent, and all the potential of his Angleseyville), and the first vessel came into service some time in 1840.

Built by W D & W E Acraman’s Ironworks of Bedminster (Bristol), being 100ft long with a beam of 60ft; it had to be built in three sections, each of which had to be towed through the Avon Cut to be assembled at a temporary slipway at Totterdown, further downstream. The assembled vessel was then towed to Portsmouth, where two simple steam beam engines were installed.

This is generally thought to be the first vessel constructed by the firm. She entered service as “No.1”, but by 1851 had been named “Victoria”, for largely obvious reasons. As for loading, the vessel could carry 100 foot passengers and 20 carriages, as was the second vessel.

Following the success of the service, in 1841 a second vessel was ordered from the same company (by now Acraman’s & Morgan of Bristol), presumably undergoing the same assembly hoo-hah as the first; the dimensions were the same, and the cost of this second vessel was £5,450. Naturally, the name adopted was “No.2”, which again, by 1851 had become “Albert”.

In 1859 “Albert” recieved a complete refit; at the time, reports of this ‘modernisation’ was described by the local press as having included the ‘replacing of the antiquated oil lamps with the highest quality gas lighting’. 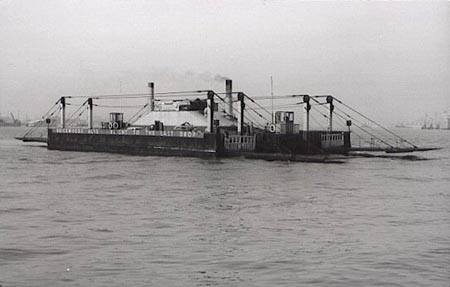 By 1864 “Victoria” was completely worn out, and scrapping was inevitable; that same year a replacement was built by Lewis & Stockwell of London; displacement was 420 tons, and was named “Alexandra” from the outset.

In 1891, “Albert” sank at her moorings following an accident; although raised a few days later, the vessel was found to be beyond economical repair, and was sold as scrap to scrap merchants Rugsley & Co of Bristol for the paltry sum of £360. A replacement was built in 1892 by Allsop & Sons of Preston, she was named “Duchess of York”, and the cost was £7,950, which included towing all the way from Preston, around Land’s End.

Upon entry into service, there was great acclaim for ‘being lit by electricity throughout’. “Alexandra” had just one major refit in 1926, and that’s not bad going for a vessel which was in continual service for about 94 years…. and I never ever got to see a floating bridge; we didn’t arrive in Gosport until June 1960. I missed it….
Here are some photos of the floating bridge; credits to original photographers.