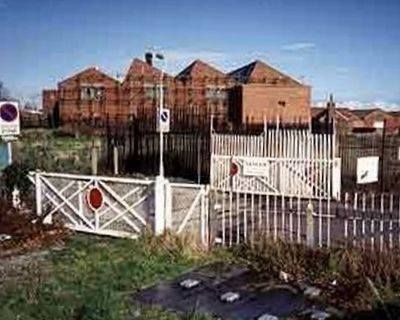 Although there had been a powder magazine at Priddy’s Hard since 1777 (a result of petitioning of residents of Old Portsmouth who were concerned about having such things as explosives stored in and around the old fortifications at the Round Tower & Square Tower c.1770), and being fortified accordingly at an early stage, it was the last of Gosport’s Royal Navy Armaments Depots to be connected by rail to the national railway system.

The internal railway system at Bednham & Frater was constructed in 1912, and connected to the then LSWR line at Holbrook, via a level crossing at Frater Gates, on Fareham Road. The extension to Priddy’s Hard was built the following year, in 1914, and involved a line through Elson and Hardway, the section between the end of Ham Lane and Green Lane (Priddy’s Hard level crossing gates) is now occupied by Heritage Way.

There were level crossing gates in St Thomas’s Road, Grove Road, and Green Lane, and rudimentary MoD gates at the end of Ham Lane, approximately where the roundabout at Monks Walk is now. The RNAD railway system in Gosport had its own fleet of locomotives (some arrived from/departed to other RNAD locations), and our RNAD railways in Gosport saw the first successful use of a fireless steam locomotive (Barclay 0-4-0F No.1307, aka “Bedenham No.1”) anywhere in the UK.

These operated on steam being forced at high pressure into the sealed boiler, so no coal or fire was involved – not wise things to have in munitions depots/factories. Apart from a couple of LSWR/SR steam locos drafted in during war years, the trains were all operated by fireless locos until the introduction of diesel shunters, the first of which was used here in 1933.

Priddy’s Hard, however, had an internal narrow gauge railway constructed in the mid-19th century; initially, this was 18 inch gauge, using hand-operated wagons; by 1904 there were 70 or so wagons, plus a hand-operated crane (all of which had brass alloy wheels, and ran on brass alloy tracks). There was even a connected track from Shell Pier across the sea bed to Burrow (Rat) Island, used for transporting unstable cordite for burning on the island (the site of the mostly-demolished Fort James); this sea bed track can still be seen at very low tides.

Long before 1929, the internal railway had been regauged to 2ft 6in, and in 1929 the first pair of Greenwood & Batley battery locomotives appeared at Priddy’s Hard; four more arrived in 1930, and a final pair completed the fleet of eight in 1937; as with previous stock, brass alloy wheels were necessary to prevent sparks. These were the first form of power to be used here on the narrow gauge system other than ‘push’.

In 1960, the use of this internal system was given over to road transport; the track was either removed, or made into concrete roadways, and the rail locos were replaced by small, strong diesel tractors, the roadways connecting the various workshops, factories and stores around the depot.

In 1973, I myself worked in Building 351 (the former Mine Store), which had become one of two transfer stations for standard gauge wagons in/out of the RNAD. The train, in my time there, came along every Friday morning, taking wagons out, then leaving wagons in. Usually there were 5 or 6 wagons. At some busy time in the past, up to seven passenger trains per day ran between Bedenham and Priddy’s Hard, but all that had finished long before my time there.

On the last day of operation, the train consisted of just one wagon and a brake van; the loco (Ruston 0-4-0DM No.414300 aka “Yard No.766”, complete with a suitable headboard. Priddy’s Hard RNAD itself closed in 1987, and mostly sold for redevelopment, although the “Explosion!” Museum has saved substantial parts, including a small section of the internal railway system, including a narrow gauge locomotive, and a couple of wagons. The whole RNAD railway at Bedenham/Frater was last used c.1989. Here’s some relevant pics; credits to original photographers