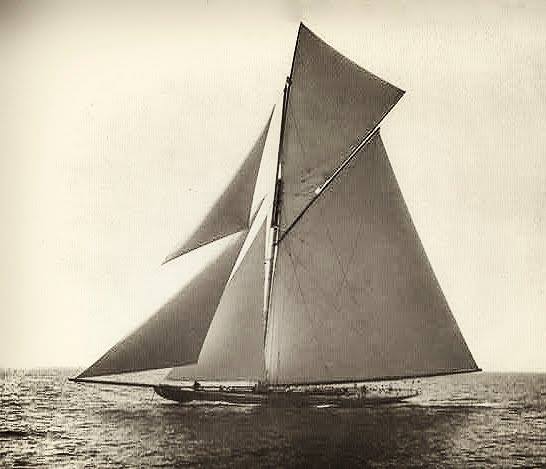 Today in Gosport’s Past:- on 14 April 1930, Sir Thomas Lipton’s ‘J’ class yacht “Shamrock V” was launched at Camper & Nicholson’s shipyard in Gosport. This was the tea tycoon’s 5th yacht built to contend the Americas Cup, and was the first ‘J’ class yacht to be commissioned and built in Britain; she was designed by Charles E Nicholson in Gosport. Although ultimately unsuccessful in the cup bid, being beaten by “Enterprise”, the yacht has a fascinating history.

In 1931 Sir Thomas Lipton died, and “Shamrock V” was sold to Sir Thomas Sopwith (founder of the Sopwith Aviation Company). In 1933, the yacht again fails to win the Americas Cup, and Tommy Sopwith uses his experiences with “Shamrock V” to design his next yacht, “Endeavour”. After completing his designs, he sold “Shamrock V” on to fellow aviation tycoon Sir Richard Fairey in the same year.

Between 1934 and 1936, he raced the yacht in the big boat classes with King George V on board, performing well against “Endeavour”. In 1937, she was sold to the Italian senator & newspaper tycoon Mario Crespi, who moves her to Italy; in accordance with Italian maritime law, he was required to give the yacht an Italian name, and she was renamed “Quadrifoglio” (Four Leaves).

At the outbreak of WW2, the yacht was in danger of being stripped of parts for the war effort, so she was hidden in a barn for the duration of the war. In 1948 Crespi had her refitted for private family use; the yacht remained in the family ownership until 1969, when Crespi himself died. “Quadrifoglio” was in great danger of being scrapped, and just two weeks before the scheduled scrapping date, she was purchased by another Italian, Piero Scanu.

In 1975, “Quadrifoglio” was given a marine survey, and was condemned; as a result, in 1978 she was returned to C&N in Gosport for an extensive refit which took three years; during this time, C&N sold the shipyard to Southampton Yacht Service, and the Gosport yard’s main jetty was named Shamrock Quay in the yacht’s honour. “Quadrifoglio” was relaunched at Gosport in 1981.

In 1985, she was purchased by the Lipton Tea Company, and donated to the Museum of Yachting in Newport, Rhode Island, USA; she was renamed “Shamrock V”. In 1988 she was refitted in Newport, RI, and restored to her original racing design; in 1989 she raced “Endeavour” over the original Americas Cup course in Narragansett Bay. She was again purchased in 1995 by the International Yacht Restoration School, to add to their impressive collection. In 1998 “Shamrock V” was sold to a South American financier. He entered her in the Antigua Classic Yacht Regatta, and won both the event, beating “Endeavour” and “Velsheda”, and the Course d’ Elegance. It was the first time in 50 years that more than two ‘J’ class yachts had competed in an event. In 1999, she crossed the Atlantic for a complete refit at the Pendennis Shipyard in Falmouth; original parts were added & restored, and steelwork was ultra-sounded in compliance with new rulings; she was relaunched at Falmouth in 2001 to great acclaim. Since this time, she has entered a number of races, and has visited the USA and New Zealand; now spends most of her time in the Mediterranean as a charter yacht. Credits to original photographers.