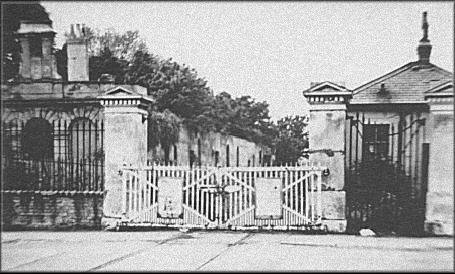 Today in Gosport’s Past:- on 13 September 1845, the railway from Gosport station into Royal Clarence

Yard was opened. The Army authorities had been talked into allowing the line to be extended through the town’s ramparts, and Queen Victoria’s own railway station was also put into use the same day.

The level crossing in Mumby Road, which many of us will remember, was a comparitively new installation; before the section of Mumby Road from the end of Spring Garden Lane to St George Barracks Guardroom existed, a moat immediately to the west of the ramparts thereabouts occupied the site, and the railway crossed the moat over an iron bridge at this point.

It wasn’t until the moat had been filled in and the ramparts south of Forton Road had been removed that the bridge was replaced by a level crossing on the new Mumby Road.
Of Queen Victoria’s station, just a tiny section of brickwork remains, but a section of track has been relaid between Weevil Lane and the west end of the ramparts tunnel, although this is NOT original, and

has only appeared in recent years. One story states that after her death, Queen Victoria was brought to Clarence Yard via her steam launch “Albert”, and lay in state in a carriage of the funeral train behind St George Barracks Guardroom overnight on 1 February 1901. That might explain the reappearance of railway track at that particular location…. Credits to original photographers (I took the colour pics myself).

Sister ship HMS “Fearless” (L10) was launched on 19 December 1963. “Intrepid” was in the process of being decommissioned in readiness for sale in 1982, but the Falklands situation put paid to these, and many other Royal Navy disposal plans. She was used for landing troops during the conflict, and the eventual surrender of Argentinian troops led to the signing of the surrender negotiotions on board HMS “Intrepid”.

She made a triumphant return to Portsmouth on 14 July 1982, along with sister HMS “Fearless”. “Intrepid” was placed in reserve at Portsmouth in late 1990, and was rather cannibalised in favour of “Fearless”. She was decommissioned on 31 August 1999, and remained moored off Hardway until her removal 8 years ago.

She was initially towed to Liverpool, with a view to preservation, or a possible south coast diving site, but neither of these ‘plans’ came to anything, and by January 2009, 96% of the ship had been recycled at Liverpool. Her motto was “Cela va sans dire” (“That goes without saying”).
Credits to original photographers.