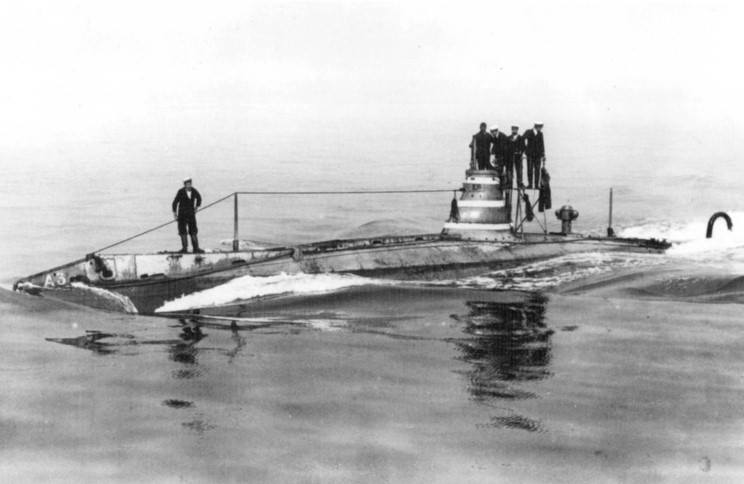 Today in Gosport’s Past:- on 13 March 1912, the funeral of the crew of HM Submarine “A1” took place at Haslar Naval Cemetery, Clayhall Road.

“A3” sank off the Isle of Wight on 2 February 1912 after being accidently rammed by the submarine depot ship HMS “Hazard” whilst surfacing during excercises, with the loss of her entire crew of 14. The submarine was later salvaged, and was sunk as a gunnery target off Portland on 12 May 1912.

In July 2016, the wreck of “A3” was declared a protected area. “A3” was launched at the Vickers shipyard at Barrow on 9 March 1903, and commissioned on 13 July 1904, being one of 13 ‘A’ Class submarines completed, the first British-designed class of submarine.

The first of the ‘A’ class, “A1”, had been sunk following a collision with the mail steamer SS “Berwick Castle” near the Nab Tower eight years earlier, on 18 March 1904 – the first British submarine to suffer the loss of the entire crew. “A1” was on excercise, and had been conducting an ‘attack’ on HMS “Juno” when the steamer, en route from Southampton to Hamburg, hit the starboard side of the conning tower of “A1”.

The submarine sank in 39 feet of water, but flooded quickly, the crew’s funerals took place at the same cemetery on 18 April 1904 – the same day as the submarine itself (“A1”) was raised from the sea bed.
HMS “Hazard” was originally a ‘Dryad’ class Torpedo Gunboat, launched on 14 February 1894 at Pembroke Dockyard, and in 1901 was converted into the world’s first Submarine Depot Ship, and was commissioned as such on 20 August 1901.

In the summer of 1902, “Hazard” was sent to Barrow to escort the “Holland 2”, “Holland 3” and Torpedo Boat No.42 to Portsmouth, where they joined “Holland 1”, “Holland 4” and “Holland 5” to form the First Submarine Flotilla. “Hazard” survived the collision with “A.3” and continued in her role of Submarine Depot Ship during WW1, but her luck ran out when she sank after a collision with the hospital ship SS “Western Australia” in the English Channel on 28 January 1918