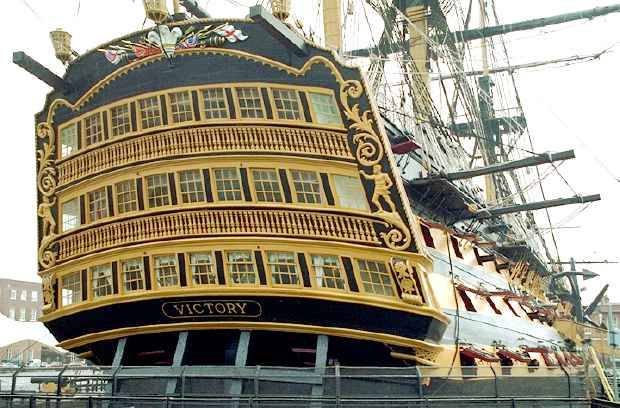 Today in Gosport’s Past:-on 12 January 1922, Nelson’s flagship HMS “Victory” was towed into the dockyard to be put in dry dock , after spending the best part of 110 years being moored at Gosport. It is a fact that all photographs of HMS “Victory” afloat were taken at Gosport, or on tow from Gosport to the dockyard.

Cameras as such hadn’t yet been invented when she was first moored at Gosport – do the math (unquote). Her arrival at Gosport, on 7 November 1812, initially as a depot ship, marked the end of her active, and extremely distinguished, career, and only just over 7 years after the Battle of Trafalgar (19 October 1805).

The fact that “Victory” achieved worldwide fame at the Battle of Trafalgar was, as it turns out, more luck than judgement; on 14 February 1797, as flagship under the command of Admiral Sir Samuel Hood, and ably supported by Captain Horatio Nelson (commanding HMS “Impregnable”) achieved a victory at St Vincent, after which Nelson was given a knighthood and promoted to Rear Admiral.

“Victory” returned to Portsmouth in October 1797, and, now being 32 years old, and having seen a good deal of action, the ship was given a thorough survey; all was not well, and she was sent to Chatham with a bleak future. On 8 December 1797, she was declared unfit for service, and it was decided to convert “Victory” into a hospital ship.

Fate intervened on 8 October 1799, when Nelson’s former command, HMS “Impregnable”, was lost in chichester harbour; suddenly a need arose for a substantial replacement, and “Victory” was plucked from the jaws of obscurity. A refit was necessary, the cost of which was estimated at £23,500, but far more needed doing than had been first thought, and the eventual cost proved to be £70,933.

Work was completed on 11 April 1803, by which time war with France had ended (27th March 1802), although not for long. It was at this time that “Victory” was painted in the familiar yellow & black, rather than black & white.

Hostilities with France began again on 16 May 1803, and normal war service was resumed (to coin a phrase) until the decisive Battle of Trafalgar. “Victory” had been badly damaged, and was towed to Gibraltar for repairs, returning to Portsmouth on 4 December 1805.

Following a further refit at Chatham (cost £9,936), she was recommissioned in March 1808, seeing action off Sweden, Spain, Portugal, and the Baltic, before returning to Portsmouth on 4 December 1812, being paid off on 20 December. She was rebuilt in Portsmouth dockyard between 1814 and 1816, repainted black & white, and placed ‘in ordinary’ and moored again at Gosport in reserve.
In 1824 “Victory” became flagship for the Port Admiral, and later as a tender to HMS “Duke of Wellington”, which had taken over that role from around 1863. In 1889, the ship was fitted out as a Navy School of Telegraphy, soon becoming a bona fide Signalling School, where ratings were sent to for a two-month signalling course. This continued until 1904, when HMS “Hercules” temporarily took over the role, which ended in 1906, when the school was transferred to the Royal Naval Barracks in Portsmouth.

Meanwhile, “Victory” remained moored at Gosport, and had a narrow escape in 1903, when HMS “Neptune”, being towed out of the harbour for breaking, showed her dislike of such an idea, and broke free from her tow, in the process ploughing into “Victory”, creating a 7 foot by 3 foot hole below the waterline. “Victory” was only saved from sinking on the spot by emergency repairs, but she was by now in a very poor state of disrepair, and only King Edward VII’s intervention prevented the Old Lady from being broken up.

Ironically. the ship which nearly caused “Victory” to sink bore the same name as the older ship which had towed “Victory” to Gibraltar after the Battle of Trafalgar had disabled “Victory”. Eventually, she was considered to be unfit to be afloat, and so the dry dock beckoned, and so it was. She regained the yellow & black colour scheme, and has proved a great crowd-puller ever since.
HMS “Victory” had drawn many sightseers to the harbour over the years, and local boatmen were more than a tad miffed when she was put into dry dock, as they made a pretty penny from ferrying visitors to view the ship.
The story goes that when the First Sea Lord (Thomas Hardy) gave his wife the news that his recieved orders instructed him to arrange for “Victory” to be broken up, she burst into tears, and insisted he returned to Admiralty House and did something about it; whether this story holds water is debateable, but it IS a fact that the page of his duty log containing the orders of the day has been ripped out – this was in 1831.

The ship was paid a visit in 1833 by Princess Victoria (soon to be Queen) and her mother, the Duchess of Kent.
HMS “Victory” is today the oldest commissioned naval ship anywhere in the world, and all Royal Navy personnel, whether service or civilian, who are not posted aboard a ship, are on record as being posted to HMS “Victory” – even if they work in a London office. Not a lot of people know that.
HMS “Victory”:- a 104-gun First Rate Ship of The Line, ordered on 13 December 1758, laid down on 23 July 1759, and launched (undocked, in actual fact) at Chatham on 7 May 1765. Too large to launch, she had been built in dry dock No.2 (now ‘Victory Dock’), and the dock was flooded so she could be floated out.

Early in the morning of the ‘launch’, shipwright Harty Larkin, the designated ‘foreman afloat’ had misgivings concerning the width of the ship – as soon as it got light, he checked, and found that his suspicions had been warranted – the ship proved to be approximately 9.5 inches wider than the dock gate entrance. He told the master shipwright, John Allin the news, who considered abandoning the launch, but Larkin asked for, and recieved, the assistance of every available shipwright, who all helped to shave off (using adzes) sufficient wood from the gates to allow “Victory” to pass safely through. No little task. Larkin petitioned the Navy for some reward for his actions, but was turned down. What a bunch of tightwads! And not a lot a lot of people know THAT, either… Here are some relevant photos; credits to original photographers, as ever.